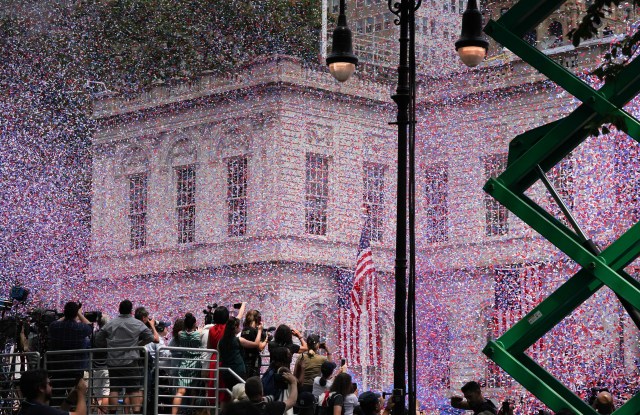 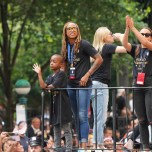 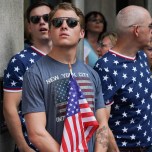 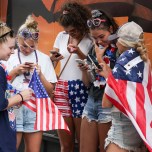 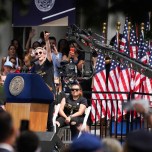 It was a New York-only celebration with a message that resonated well beyond the city’s borders.

A crowd of 300,000 lined the Canyon of Heroes on lower Broadway on Wednesday morning for a ticker-tape parade to pay tribute to the World Cup-winning U.S. women’s soccer team, the fourth time a U.S. team won the trophy. The parade was actually a repeat performance for some of the women’s squad, which won the World Cup in 2015. But this time, their message was far more than just a sports victory. Think equality, unity, gender equity and inclusion. Led by MVP and cocaptain Megan Rapinoe, the team has sued the U.S. Soccer Federation over pay discrimination. As a result, parade fans cheered on the team, chanted and held up signs for “Equal Pay.”

Mayor Bill de Blasio and his wife, Chirlane McCray, echoed the sentiment during a presentation to the team on the steps of City Hall. McCray opened the ceremony by telling viewers: “This is how we welcome our heroes back home.” But in addition to celebrating the team’s “incredible skill and flawless teamwork,” McCray took up the mantle of these “winners with a message,” and led a chorus of chants for equal pay.

De Blasio — a Democratic presidential candidate — weighed in on the issue as well, saying, “This team has shown an undeniable truth, an inalienable right — that the equality of women must be guaranteed in this nation. And let’s honor them by doing it — let’s honor them by ensuring it. They have inspired millions and millions, and they have inspired particularly young women to believe in themselves, to be brave, to be bold, to be fierce.”

Carlos Cordeiro, the president of the U.S. Soccer Federation, took some heat from the crowd of mainly young women and girls, who had snagged seats to attend the ceremony in City Hall Park. His celebratory speech was interrupted by boos and calls for equal pay. In response, he said to the team members seated around him: “You’ve raised your voices for equality. We hear you, we’re committed to doing right by you.”

The crowd quieted, anticipating some sort of blockbuster announcement, but Cordeiro only said the organization will “continue to invest more in women’s soccer than any other country and will encourage others, including our friends in FIFA, to do the same. We believe all female athletes deserve fair and equitable pay, and we believe we can get this going.”

Closing out the post-parade ceremony, Rapinoe said she was going to “stick my neck out” and “endorse” Cordeiro, who was one of the team’s biggest supporters and attended every game. “We appreciate that. I think he’s on the right side, I think he’s going to make things right. We look forward to holding those feet to the fire,” she said.

On a lighter note, she thanked New York city for the “insane” celebration and credited her teammates with being “so resilient, so tough, just so badass.”

Rapinoe charged everyone in attendance to step forward to further the mission. “We have to be better, we have to love more, hate less,” she said. “This is everybody’s responsibility, to make this world a better place. This team does an incredible job of taking that on our shoulders and we understand the platform that we have in this world. Yes, we play sports, but we’re so much more than that. There’s been so much contention these past few years, but it’s time to come together. We have to collaborate, it takes everybody. Do what you can, be more, be better, be bigger than you have ever been before.”

Right before the parade started, New York Gov. Andrew Cuomo sought to steal a bit of the spotlight. He did not attend the official parade ceremony, but signed legislation guaranteeing equal pay in New York State. “There is no rationale why women should not get paid what men get paid,” he said. “These are women’s soccer players, they play the same game as the men’s soccer players, and they play it better — so if there is any economic rationale, the men should get paid less than the women. New York will continue to lead the way forward and stand in solidarity with women and girls in every corner of this state. By signing this legislation, we are not only doing the right thing, we are also doing the moral thing and equal pay for equal work is now the law in the state of New York.”

Before the parade got under way, New York Police Department officers helped funnel the parade goers through the barricaded blocks of lower Manhattan. Sanitation department workers clustered in the traffic-free streets, leaning on brooms and chatting with police officers amidst chants of “USA! USA!” and “Equal Pay! Equal Pay” rose from the fans. One driver used a car horn to keep that cadence. New York City’s police band got the crowd going with a rendition of “Uptown Funk,” but it was the bagpipers’ “God Bless America” that really rallied the spectators. Another welcome sight was the pack of media photographers and videographers on a Department of Sanitation truck.

Along the route from Battery Park to City Hall, some squinted upward into the morning sunshine as the sheets of paper seemed to linger in the sky. “Where’s Megan?” was a recurring refrain from the young and not-so-old fans. One of Rapinoe’s more industrious devotees carried a white cardboard silhouette of her signature postwin arms extended stance. During an interview with CNN’s Anderson Cooper on Tuesday, Rapinoe implied that its significance may be a we-have-arrived moment. Although she has been clear about having zero interest in a White House visit — and President Trump had yet to extend one as of Wednesday — that doesn’t mean they won’t be visiting the Beltway. Visits with U.S. House Speaker Nancy Pelosi, Sen. Charles Schumer and Congresswoman Alexandria Ocasio-Cortez are planned.

Spectators waved signs that read “One Team. One Nation” and “Equal Pay.” Red, white, and/or blue were the colors of choice, with many sporting soccer jerseys with their favorite player’s names and T-shirts imprinted with “United States vs. Everyone.” Tweens and teenagers painted “USA” and American flags on their cheeks. A red, white and blue tutu, star-spangled jean shorts and American flag-printed pants draped as a shawl were a few of the more imaginative signs of patriotism. Five-dollar flags were up for grabs, as were bandannas, and “Shirts, shirts, shirts!” that ran $10 a pop or two-for-$30 World Cup T-shirts. For $5, fans could also buy what looked like Olympic medals, but was actually a team button attached to a red, white and blue ribbon. With 15 ribbons sold, Juliana Saxe said, “I was going to come here anyway today. I like paying my bills, I like walking around, and hey I got some exercise today, so I’m multitasking.”

Lugging 48 championship T-shirts and enticing buyers with “We’ve got all sizes guys, and all the names on the backs,” Pete Jones described business as “not bad. I’d rank this event as an ‘eight or nine’ — the more people the better.” In front of the Citibank outpost where they work, three Millennial men were also on the clock, but scant on details. “We’re here because we have to be,” one joked. But they were all-in when the World Cup winners rolled by, standing on their tiptoes with cell phones raised to get better video footage.

Holding the gold-colored sign that she made with a masking tape message of “Equal Pay” that was accented with quarters, 11-year-old Alice Farmer explained why she wanted to make a sidewalk statement. “Men are getting paid so much more money than the girls are, and we’re winning just as many games as they are,” she said, adding that the team has taught her “that girls are just as important as men are.”

Matilda Boland stood nearby holding her toddler son Henry, who wore sailor-striped shorts and a red T-shirt and was waving an American flag. She said, “It’s kind of a historical moment — not just that they’re being honored in New York, but all of the politics around the team and the fact that they don’t want to go to D.C. My son is a young soccer player. He’s American, I’m Australian, but it’s important for him to support.”

City officials declined to comment on the parade’s expense other than to say that U.S. soccer will kick in a $475,000 contribution to cover all direct costs of production. The 2015 parade for the American World Cup winners reportedly cost $2 million, with $450,000 in private donations.

Just back from watching the World Cup in Lyon, France, New Yorker Morgan Harder said, “They came to my hometown this time.” She and her husband Wes both play league soccer in Manhattan. As for what the national team means to this country, she said, “I guess that depends which part of the country.”

In New York for a weeklong sightseeing tour with 20 Girl Scouts from Mississippi, Tennessee and Arkansas, one of the troop’s leaders, Emilie Hutcheson, said the parade was a must. “We have similar values — definitely. Equal pay is one of the things that we want our girls to value. We didn’t drive all the way just for the parade, but we didn’t want to miss it.”

The uniform-free Girl Scouts were clearly impressed. Seventeen-year-old Zoie Yarbrough said, “The most powerful thing about being here is seeing the diversity within the city of New York, and being able to see the different cultures and how that differs from the South.”

Standing on a fire hydrant with a hot pink sign that read “women are greater than men at least when it comes to soccer. They should be paid more,” Lyn Chin, an employee at the buying office Ocean Dayz, turned up to support women. “Everybody wants to know or feel like they are appreciated. I really appreciate that they spoke out for what they believe in. It’s inspiring for all women in the future.”

A soccer fan since 2013, Tiesha Mayfield took a solo trip from the Bronx to stake out a spot on lower Broadway two-and-a-half hours before the start. She said Crystal Dunn is the reason she picked up the sport and she now plays for SUNY Delhi. Her team shirt proved that point. “I am just hopeful that she will sign my soccer cleats. She is a huge inspiration. What these girls are doing today is amazing,” Mayfield said.

Among the men cheering on the players, was Martin Estrada, who gamely offered strangers his replica trophy of the FIFA men’s World Cup for selfies. He said, “What these women are doing is incredible. I came to this country 35 years ago. I remember when [Brazil’s three-time World Cup winner] Pelé had a dream of bringing soccer to the U.S. He would love to see this.”