The immersive theater experience put audience in the position of Chinese factory owners. 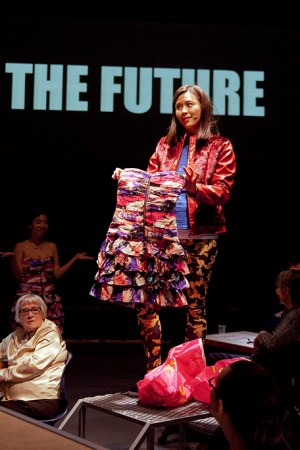 17 TV Shows, Films and Documentaries to Watch in August 2021

The garment industry has been thrust under the cultural spotlight in recent weeks.

Following the release of Andrew Morgan’s harrowing film “The True Cost,” which questions the relentless demands that the pace of fast fashion places on the garment industry, the Young Vic’s production “World Factory” created a buzz during its run in May and June.

The immersive theater experience, which wrapped last weekend in London, saw audiences team up as owners of fictional Chinese factories — overseen by four actors, who hand out the tasks — and have to work through the ethical dilemmas that are part and parcel of the industry. Among the conundrums are either sacking half your workforce or halving their pay; telling underage workers to take unpaid leave or ask them to find fake IDs and sticking with the steady production of workwear, or pursuing the high risk and potentially high rewards of fast fashion. At the end of the production, the teams in the audience can compare who made the most profit, and who took the most ethical path.

All the dilemmas are based on the production team’s research in Chinese factories, and the game is interspersed with videos and monologues, which draw comparisons between the garment industry that rose during England’s Industrial Revolution, and today’s Chinese factory system.

Here, Zoe Svendsen of the Metis theater company, who directed and designed the production together with Simon Daw and Chinese director Zhao Chan and his company Grass Stage, discusses the ethical minefield that the play explores. The production made its debut at the New Wolsey Theatre in Ipswich in April, before traveling to the Young Vic in May and June, with Svendsen noting that she has plans to take the production further afield.

“There’s a lot of interest,” said Svendsen. “We’ve had a really intensive process of exploring [the production’s] questions, and now it would be interesting to see…where’s next, we’d love to keep broadening it out to more audiences.”

WWD: How did the idea come about?

Zoe Svendsen: The idea for the project was inspired by meeting a theater director in China called Zhao Chuan, and he was talking to me about Manchester in the Industrial Revolution. And I was thinking, what about the…China labels on my clothes now? The reason we decided to focus on textiles and the textile industry was because of British history — the cotton mills in Manchester — and that being the origin of the factory system that has created this world of mass production.

WWD: Where did the game idea come from?

Z.S.: We were exploring many forms for trying to really bring the audience into the heart of the questions and the topic. [When the Rana Plaza disaster happened, in 2013] it was frightening in a way — there we were investigating all of this stuff, and such an awful event that was symptomatic of the pressures of the system [was] occurring. It got us thinking about what position we are in in relation to it. You got the feeling that people need to find someone to blame…what we wanted to do was put the audience in that difficult position. It’s easy to judge someone else’s ethics, but what happens when you’re in the middle of it? It was a way of saying, the problems are not just to do with individual morality — it’s the way the whole system works.

WWD: Have the choices the audiences made surprised you?

Z.S.: There’s a real spread across the whole game. But we noticed that there was one particular story line that people weren’t ending up in, it was one of the more ethical ones. We realized that we’d written a series of decisions that might have seemed it would be imprudent at that point to put wages up — so most people were choosing not to. You realize it’s about the system — it might not be a profit motive, but you’ve got to survive.

WWD: Do you think it’s the fast-fashion industry — rather than the garment industry in general — that’s driving unethical practices?

Z.S.: Definitely. The system wasn’t quite this extreme 10 years ago. It’s the requirement for very, very fast turnaround in the shops, for increased footfall. My impression is the factories have very little room for negotiation under those conditions. They can’t say, “We can only make this garment for X amount.” The retailers or the middlemen say, “Either make it for us for this, or you don’t get the order.” That’s when the pressures kick in on working conditions. The whole system’s under pressure. I don’t think 10, 20 years ago the garment industry…was something that was worth investing in. Whereas now it feels as if that circulation of goods and consumer buying is actually making real money, for some people.

[And] I don’t think it’s consumer demand that’s driving fast fashion. Once the clothes are there, you’ll buy them. I think people end up spending more money overall, for items that are lower quality, generally, of which only a few you actually really like. I don’t think that’s really in the interest of the consumer.

WWD: Has working on the play changed your shopping habits?

Z.S.: It has. I’m just not sure a given piece of clothing is worth the level of discomfort that people are experiencing to make it. It makes me feel a bit unwell. And you can’t be sure that child labor wasn’t involved.

WWD: Do you sense consumers turning away from fast fashion?

Z.S.: I think there’s a level of frustration — there’s such a gap between people’s personal ethics and what’s available for them to buy. I’m certainly someone who isn’t very fond of hippie tassels and so on, the versions of ethical clothing that wear the visuals of ethical values on their sleeve are not really for me. I want to be confident that I’m buying [something] because I like it, but without feeling like I’m participating in a system that I feel is really profoundly wrong.

WWD: What do you think the show has achieved?

Z.S.: It’s really sparked a conversation about the bigger picture, about how we want to live. I think that was the politics of the show really, not to make a decisive statement and say, you have to do this. What’s important is we take charge of the issues and talk about them and think about them. I think that’s the way change really happens, when people become more aware of the situation, then start to act in ways that can change it overall. Everyone’s got their own solution — the show’s more interested in presenting the conundrum and inviting that conversation. It’s a piece of theater, it’s not trying to tell anyone what to do.