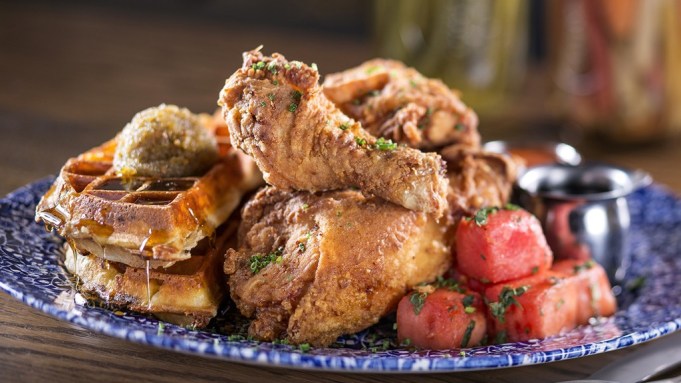 Fried chicken and waffles has made its way onto the Strip with the January opening of Yardbird Southern Table & Bar, located inside the Venetian.

From restaurant group 50 Eggs Inc., the 8,000-square-foot eatery is an offshoot of the Miami Beach original. Inside, rustic accents like reclaimed wood paneling, whitewashed brick and an Edison bulb chandelier make the 180-seat dining room a casual and cozy space.

On the “Table” end of things, executive chef Todd Harrington serves up Southern classics with a spin, such as chicken with watermelon and waffles with honey hot sauce and bourbon maple syrup ($36), or the 18 oz. smoked tomahawk pork chop with roasted heirloom potatoes and kale pesto ($55).

There is nothing classic about the libations list, which features craft cocktail ice in a variety of shapes and flavors, all cut from an in-house ice room. For the Yardbird Old Fashioned ($15), mixologist Robert Ortenzio drops a two-inch ice sphere into his concoction of bacon-infused bourbon, orange bitters and maple syrup. Or try the Porkchop ($14), a mixture of bourbon, dijon syrup, yuzu juice and apple cider garnished with a dijon-thyme ice cube.

Stirring up the Strip’s bar scene is 3535 at the Linq, named after its address on Las Vegas Boulevard as well as the 35 house-made spirit infusions on the menu. Although located next to hotel check-in, the newly revamped watering hole is not a typical lobby bar.

With a floor-to-ceiling color-changing “vortex” light fixture behind the bar, power outlets at every seat and TV-lined private booths, 3535 is more of a high-tech hideout, with an equally inventive cocktail menu.

Bacon-infused bourbon, mint Oreo-infused vodka, wasabi ginger-infused gin and nutella-infused tequila top 3535’s list of interesting concoctions, which are available in shot form for $7, or, for the more skeptical sipper, in a tasting flight of three for $14. The infusions can also be mixed into creative cocktails, such as the Pig Newton, made with fig-infused Jack Daniels honey and ancho chili and bacon bourbon, which comes in full ($13) and half ($7) sizes.

Upping the level of culture on the Strip is the Cosmopolitan’s P3 Studio, an intimate venue on the hotel’s third floor showcasing contemporary art installations. Foregoing the traditional formality of a museum, guests at P3 Studio can watch artists at work or participate in interactive exhibitions, making art more approachable and designed to attract a new audience.

From Feb. 11 to March 8, New York-based artist David Colman will show his interactive “Santa Confessional” piece, which made its debut at Art Basel Miami. For the installation, guests enter a two-person confessional booth one at a time to chat with the artist, who is dressed as Santa, while onlookers eavesdrop.

Chef Michael Mina (Stripsteak, Michael Mina, Pub 1842) hopes his latest venture, Bardot Brasserie inside Aria, will transport diners to the City of Light — specifically, to a café on the Champs-Élysées in the 1920s.

Open for dinner daily and brunch on the weekends, Bardot Brasserie serves a range of traditional French fare, such as wood-grilled duck à l’orange with sauce Maltaise ($13) or escargots Bardot with hazelnuts, chartreuse butter and puff pastry for starters ($17). Pair these with a glass of wine — Bardot claims to have the largest selection of French wines in Las Vegas — or maybe a signature cocktail, such as the Voltaire, a mix of cider, baked apple bitters and house-made ginger syrup ($15).

In “Showstoppers,” Steve Wynn revives his personal Broadway favorites with help from a 35-person cast of singers and dancers, elaborate costuming and an on-stage 31-piece orchestra.

The casino magnate’s inspiration for the production was the $5 million 50th birthday party he threw for his wife, Andrea, last March, which reignited his passion for musical theater. His new 90-minute spectacle inside the Encore Theater features performances of 18 songs from more than 10 musicals, including classics such as “One” from “A Chorus Line,” “Willkommen” from “Cabaret,” “Sit Down, You’re Rocking The Boat” from “Guys and Dolls” and “Razzle Dazzle” from “Chicago.”

Performances run Tuesdays through Saturdays at 7:30 p.m., with an additional 10 p.m. option on Friday nights, and tickets start at $100.