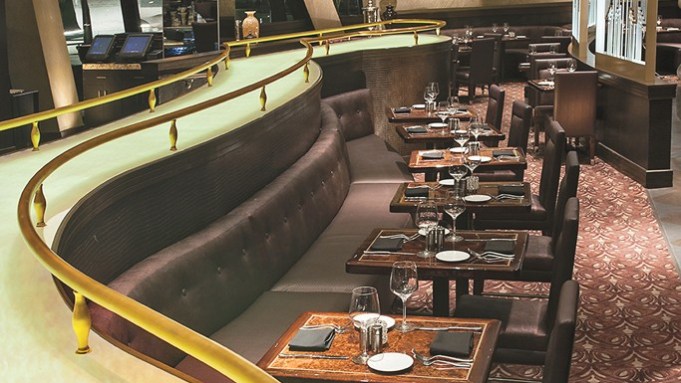 Where to eat, drink and see a show — between the shows.

Plucked out of a scene from F. Scott Fitzgerald’s novel “The Great Gatsby,” She by Morton’s is a boutique steak house and nightclub with all the design trappings of the Roaring Twenties.

The restaurant, located on the first level, features private dining rooms and an indoor-outdoor lounge. Guests can choose from a variety of steak and seafood dishes by chef Todd Mark Miller, like the beef short ribs with chive potato puree and red wine gravy ($29) or sea bass bites with ponzu glaze, cilantro yogurt and avocado ($21).

RELATED STORY: Ones to Watch in Las Vegas >>

The in-house sommelier can recommend a wine to pair with any meal, and specialty cocktails are also available — like the SHe Likes Chocolate, a mix of Van Gogh chocolate vodka and Godiva Chocolate Liqueur ($15).

The theatrical nightclub, located on the upper level, features tiered seating to create the illusion of participation with a host of interactive performances and featured DJs.

NEXT: The Ainsworth Las Vegas >>

The Ainsworth Las Vegas at the Hard Rock Hotel & Casino aims to redefine the typical sports bar. This upscale venue is an extension of the New York flagship location by Paige Hospitality Group, a New York-based lifestyle and hospitality operator.

One secret: The TVs remain hidden unless there is a sporting event being aired. Visitors can also make wagers at the betting station operated by Cantor Gaming.

The 3,500-square-foot space, which opened last September, has a rustic decor with a menu of 10 signature plates, such as the tuna tartar tacos with red onions, scallions, red chili vinaigrette and guacamole ($16).

Diners can also chow down on any of three slider options, including Philly sliders with peppers, onions, provolone cheese and American cheese ($14).

An abandoned theater filled with peculiar characters is the backdrop to a story of Zark, the ringmaster of a circus coming back to life. Zarkana by Cirque du Soleil, written and directed by François Girard, is the latest acrobatic spectacle from the world-renowned company based in Quebec.

The name Zarkana is a combination of the words bizarre and arcane, an accurate description of its fictional world. Ann-Marie Corbeil, artistic director, said Zarkana is unique in comparison to other Cirque du Soleil shows because it brings the company back to its roots.

“It’s a big show, but at the same time, even if it’s eccentric and grandiose, it’s still very accessible, very human and humorous,” said Corbeil.

Following engagements at Radio City Music Hall in New York, Arena Madrid and Moscow’s Kremlin State Palace Theatre in the past year, Corbeil said coming back to Las Vegas has eased the challenges of being on tour.

The Las Vegas show at Aria Resort & Casino is in a theater of fewer than 2,000 seats, making it easier to engage with the audience compared to the 6,000-seat theaters at Radio City or the Kremlin State Palace, said Corbeil. “It gives us a chance to be more intimate and really feel the audience, and vice-versa.”

The Smith Center for the Performing Arts will present 10 of Broadway’s most popular musicals. This special “Broadway Las Vegas Series” will be coming to Vegas for a second season.

Tickets to the upcoming Broadway Las Vegas Series will be available to existing season ticket holders beginning Feb. 19. New subscriptions will begin in May 2013. Sale dates for individual tickets will be announced at a later date.