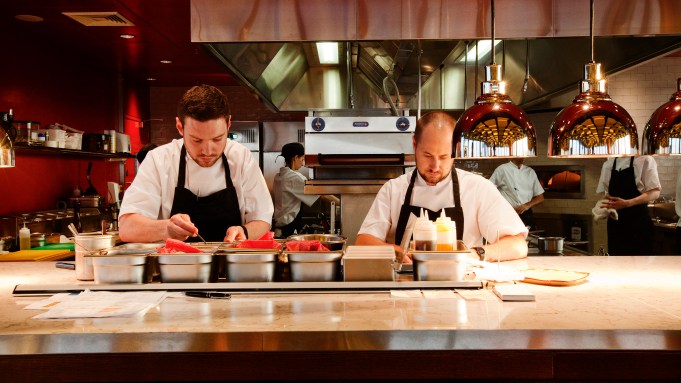 London is a city that’s not-so-famous for its round-the-clock offerings, with only a handful of restaurants open late for the night crowd. Enter Duck & Waffle, a 24-hour restaurant near Liverpool Street. Based on the 40th floor of Heron Tower at 110 Bishopsgate, Duck & Waffle is touted as the highest restaurant in the British capital, with panoramic views that span all the way to Canary Wharf. The establishment is a floor away from its sibling restaurant Sushi Samba, which fuses Japanese, Peruvian and Brazilian cuisines.

Duck & Waffle executive chef Tom Cenci pursued his culinary path at 1 Lombard Street, working under Herbert Berger, one of the first chefs in the U.K. to gain a Michelin star. He headed to Paris to work with Joel Robuchon at Restaurant Laurent. Cenci worked at Nobel Rot before taking on the job of head chef for Harvey Nichols in Turkey. Prior to joining Duck & Waffle, he ran My Dining Room, a small gastropub in London.

Cenci noted that previous chefs he has worked with — including Berger, who he worked with for four years — are his sources of inspiration. “It was the first job out of college,” said Cenci. “He really kind of mentored me and he really put some discipline into me. I matured a lot underneath him. He just taught me so much. So ever since then, the chefs that I’ve worked for are the kind of the people I’ve always looked up to.”

With a simple approach to creating dishes, Cenci said that the restaurant focuses on keeping dishes uncomplicated and seasonal, adding a twist of fun. “The main thing is to create a dish that [becomes part of the menu] once we try it,” said Cenci. “If it makes us smile, and makes us happy, then it kind of goes on the menu. If we don’t get that enjoyment out of eating it, then no, it’s not a dish that we want to serve to other people. So it’s always about keeping things simple, and enjoying food.”

Most recently, with the team, the chef has dreamed up a special naan bread for the restaurant. “We were trying to make an Indian dish called a keema naan,” said Cenci. “Where the bread inside has meat, and we just couldn’t get the recipe right, and the recipe just kept evolving and evolving. We’ve actually now kind of perfected the keema nan bread itself, so that’s going on very soon. So we have the keema naan — so we’ve got the braised lamb inside the bread, and that’s going to be with ahara bhara sauce — which is kind of like a spiced Indian green sauce, served with chilies. So it’s taken us a while to get there but that goes on the menu very soon.”

Cenci — who admits he has done a 24-hour shift — noted that the restaurant operates on a strict timetable. “We have different teams,” said Cenci. “So we have a breakfast team, day team and night team. So we try not to mix those teams. And being in charge of that, you have to make sure everything is covered. Sometimes people call in sick, or don’t show up and you have to be able to cover that. So if you’re on the day shift and then the night shift doesn’t turn up, or is sick for example, you have to be able to cover that. And if you can’t get anyone to come in you have to do it yourself.”

London’s night subway services kicked off last month and run on the Central and Victoria lines, and Cenci believes it will be a good thing for the British capital. “It’s really hard to pinpoint an actual client or customer that we get in, because we’re so variable,” said Cenci. “We have different times of day, we’re by Liverpool Street and the City, so there are all the banks, and the stock exchanges and things — so we get a lot of city workers in and because of the views we get a lot of tourists coming in as well. But then we have Hoxton and Shoreditch which is just down the road, so we get a lot of the hipsters and the drinksters coming in, and because we’re late-night as well we get a lot of couples coming in on date nights. For example, they’ve just been to a late night movie showing, so they’ll turn up at, say, 2 o’clock in the morning on a date. You get in people coming in at 5 o’clock in the morning to see the sunrise, so a real mixture of clients.”

Next up, the restaurant is taking part in London Cocktail Week next month. The restaurant plans to head East for a week-long pop-up in the Ozone in the Ritz Carlton in Hong Kong.