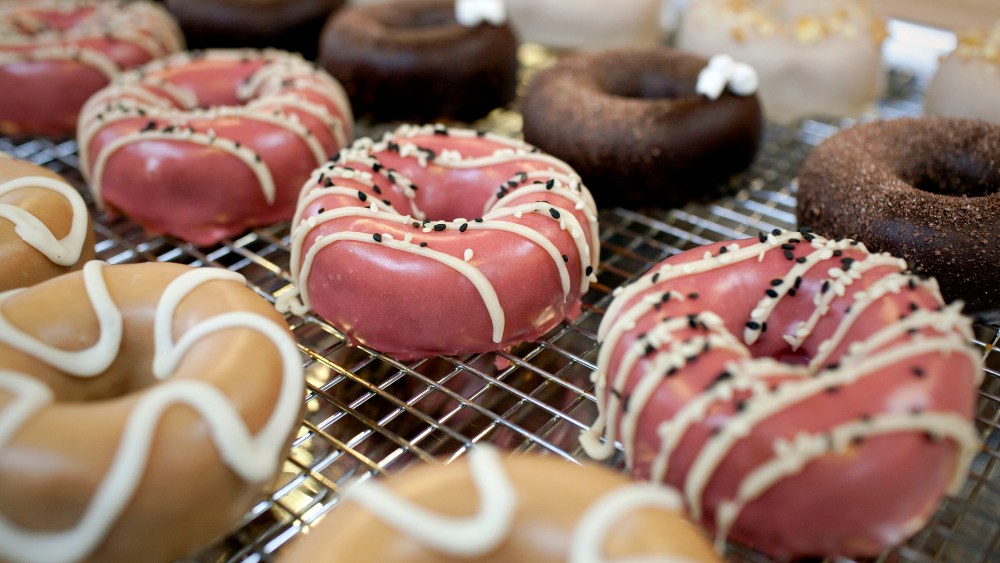 Wylie Dufresne has fulfilled his longtime dream of opening up a doughnut shop.

The chef, who was behind the innovative WD-50 until its closure in 2014 and, more recently, the more casual bistro Alder, has opened up Du’s Donuts inside The William Vale hotel in Brooklyn.

“I’ve been wanting to do a doughnut shop for a number of years,” Dufresne explains. “I’ve been working on a restaurant proper downtown in the Financial District and this presented itself right as that was falling through, so I jumped at it,” he says of landing inside the still-new hotel by McCarren Park.

The ground level location, which features floor-to-ceiling windows, was designed by architect Richard Lewis. The airy space offers minimal seating but features an open format, giving guests a behind-the-scenes look at the production aspect of the operation. Coffee is local from Brooklyn, and the orange coffee cup design — which features a hexagonal and pentagonal coffee molecule pattern — was designed by Dufresne’s sister-in-law.

The jump from deep-frying mayo — one of Dufresne’s iconic WD-50 tricks — to deep-frying dough isn’t too extreme of a pivot; doughnuts practically run in his blood. “My great-grandfather was a doughnut maker, and I grew up eating a lot of doughnuts — I come from New England, the home of Dunkin’ Donuts,” Dufresne explains. “And my other great-grandfather had a diner, where doughnuts were heavily featured, and just part of a lot of New England culture. Doughnuts are all over the place,” he continues. “I’ve thought our approach to cooking at WD-50 and Alder is equally applicable to the world of doughnuts. There’s an opportunity to be creative and be thoughtful, and try to see doughnuts through a different lens.” 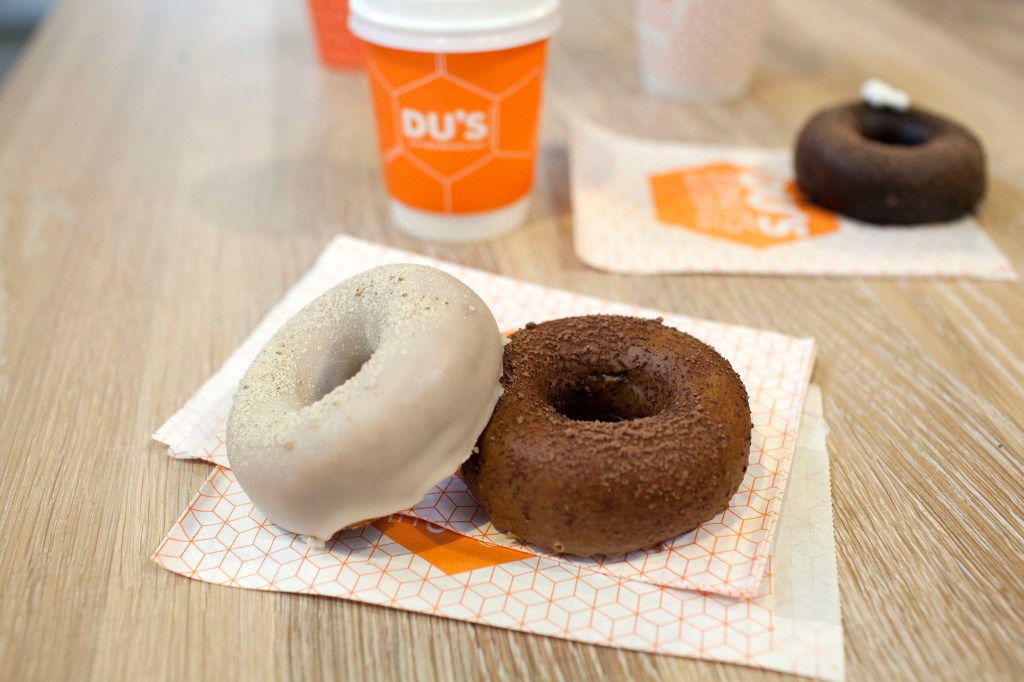 Dufresne has spent the past few months with pastry chef Colin Kull (the pair were connected through mutual friend Christina Tosi, of Milk Bar fame) “perfecting” the recipe for their cake doughnut and the viscosity of the frosting, as well as inventing flavors. Not as easy as it sounds, even for a veteran chef. “I didn’t think it would be easy to make a doughnut, but I didn’t think it would be as hard as it was,” Dufresne admits. “I mean, at the end of the day, it was easier to deep fry mayonnaise at WD-50 — which was hard.”

Du’s Donuts will feature around 10 different doughnuts at a time — all cake — with the offerings changing as Dufresne and Kull continuously tweak, edit and refine their ideas. “Much to Colin’s probable disappointment, I have his phone number, so I can text him at all hours of the day,” Dufresne says, casting Kull a playful glance. Some doughnuts play up nostalgia — the Mexican Hot Chocolate doughnut, which features mini marshmallows reminiscent of the ones inside Swiss Miss mix, a Creamsicle doughnut, a Bananagrams doughnut — “Not only a fun game to play as a child but also a fun flavor combination,” Dufresne adds.

“You know, they all remind me of conversations with different people, different moments, and they’ve evolved,” Dufresne continues. “Colin and I have worked to try to develop what we feel is a unique aesthetic, and we want people to look and go, ‘Ah, that’s a Du’s Donut.’ And I think all the great doughnut shops do that. You know when you’re looking at a Krispy Kreme. You know when you’re looking at a Doughnut Plant doughnut. And we want people to go, ‘Ah that’s, you know, that’s Du’s.'”