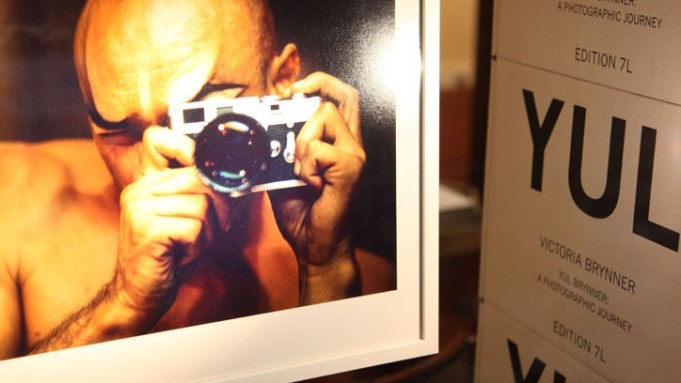 PARIS — Doris Brynner did her best to avoid having her picture taken in front of a steamy, poolside photo taken by her late husband, Yul Brynner, we won’t say how many years ago. “No, no, not the before and after,” she implored Betty and Francois Catroux, among the beau monde who turned up at Pierre Passebon’s gallery in Paris Tuesday night.

Brynner’s daughter, Victoria, signed copies of her book, “YUL, Yul Brynner: A Photographic Journey.” showing the Oscar-winning actor’s talents on the other side of the camera, and welcomed the likes of Valentino Garavani, Alain Delon, and Karl Lagerfeld, whose 7L imprint published the tome.

While Tatiana Santo Domingo ogled a shot of a young Joan Collins lounging in a hot pink dress, artistic photos of wine glasses made Betty Catroux thirsty. She raced outside the gallery and poured two full of white wine. “They’re not both for me, don’t worry,” she assured.

Farida Khelfa, in a pinstriped Louis Vuitton pantsuit, said she’s wearing a new hat: documentary filmmaker. Her subject is couturier Jean Paul Gaultier, and her 52-minute program is slated to air on the France 5 channel. “I’m still filming. I’m going to do his show and his last Hermes show,” she said.

As the glittery crowd moved on to dinner at a nearby restaurant, Doris Brynner asked Lagerfeld if he might join them, but he invoked the tug of the studio and sketchbook, allowing he may have “lots of class,” but that he’s “working class.”