Affairs of State: The Obama Family in D.C. Society

As Barack and Michelle Obama prepare for their maiden State Dinner tonight, Washington hostesses are hoping to be on the couple's A-list. 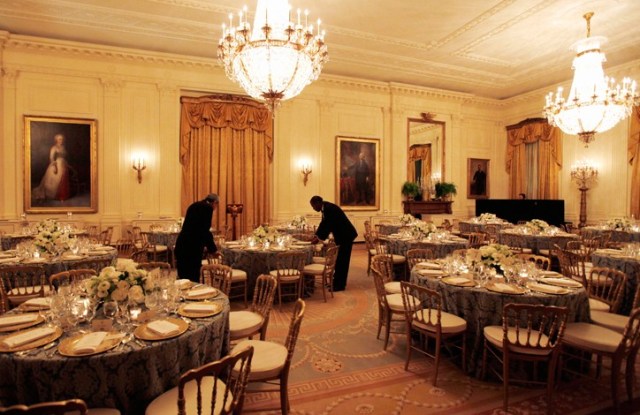 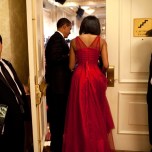 angle to propel their names onto the Obama White House’s social A-list. As the First Couple prepares for its maiden State Dinner tonight for India’s Prime Minister Manmohan Singh, behind the scenes, smart socialites are keeping their powder dry. No one would ever turn down an invitation to a state dinner, a poetry reading or a music performance at the White House, not to mention next month’s reception for the Kennedy Center Honors Gala. But aspiring Washington hostesses aim for even bigger stardom. For them, the real question is: Which one will be standing at their door when the Obamas make their first house call?

“People are speculating where they’ll go first. They’ve gone to Valerie Jarrett’s house, but that was a family affair,” says Lee, referring to the home of the President’s closest senior White House adviser. “And the President went on his own to George Will’s for dinner,” she adds, referring to the conservative columnist who was also the first to entertain Nancy and Ronald Reagan when they came to town. “But so far, the Obamas haven’t started to go out together to private events.”

The challenge isn’t lost on Democratic insiders, who know an uphill battle when they see one. Mandy Grunwald, the Democratic political consultant who worked on Sen. Al Franken’s long-contested Minnesota election race, points to the Obamas’ summer holiday on Martha’s Vineyard. “They kept to themselves,” says Grunwald, whose family members have been regulars on the Vineyard for years. “No dinner parties given or gone to.”

For the moment, the attention of Washington society is focused on tonight’s State Dinner. But for the smart crowd of new social divas, those with tough egos, long-term goals and plenty of patience, that’s just the latest leg in the ultramarathon of luring the Obamas — a process that started almost from the moment he was elected.

Topping everyone’s dream guest list is the Social Office Troika, the three keepers of the coveted White House guest lists. White House Social Secretary Desirée Rogers and her two affable aides, Ebs Burnough and Joseph Reinstein, have been wooed, wined and dined since before the inauguration. “Desirée Rogers has been to my house lots of times,” says Obama friend Teresa Heinz, wife of Sen. John Kerry, who volunteered her Fox Chapel Farm outside of Pittsburgh in September to entertain world leaders’ spouses during the G-20 Summit.

Ali Wentworth, another in-the-loop hostess, threw a birthday party for Rogers in June. And Republican hostess Bonnie McElveen-Hunter opens up her house whenever Rogers needs a venue.

Anyone who thinks that no successful hostess would ever stoop to using strong-arm tactics need only consider the lengths to which Pamela Harriman went. Tom Bryant, president of the National Foundation for Mental Health and a lifelong friend of both Jimmy and Rosalynn Carter, remembers when Harriman invited him for his first fancy Georgetown dinner party.

“She literally abandoned her guests and backed me into a corner in a nearby study,” Bryant recalls. “She handed me the telephone and told me to call the White House right then and there. So I called, and Rosalynn answered. She asked Jimmy if they were free and he said, ‘What’s Tom doing in such high cotton?’ To which Rosalynn said, ‘I think he was invited only so he could ask you to come to dinner.’’’

While the Carters ultimately opted for a low-profile visit to the Georgetown home of their friend Peter Bourne, Carter’s special assistant for health issues, the Reagans stepped out into a blaze of klieg lights. Their arrival at the home of newspaper magnate Katharine Graham raised the curtain on the rollicking Eighties.

Washington veterans fret the Obamas might end up being more like the Carters than the Reagans in their reluctance to embrace old D.C. hands. Several key Democratic senators have complained privately to friends about their problems getting close to anyone in the Obama White House apart from Chief of Staff and former Congressional colleague Rahm Emanuel. For socialites, the go-to person is Rogers.

“There’s a reason there hasn’t been a state dinner until now. They’re not pompous, and they’re not that formal,’’ says Lisa Brown, White House staff secretary, referring to the Obamas’ dinner for the Prime Minister of India. Brown, who graduated from Princeton and the University of Chicago Law School, says the Obamas like partying with the home team. “They really like sports — his basketball and her tennis. And music. They’ve had a series of musical nights — jazz, Latin, country and classical. They’ve had families in the White House for movies.” Families of the kids from Sidwell Friends School, where their daughters are enrolled? No, says Brown. “More like me and my son, staff and their families. They like time with the family.”

Unlike other White House residents, who maintained a firm distance between old friends and White House staff, the Obamas pal around with the people who work for them. When the First Lady goes to the theater, she often sits next to her social secretary, Rogers. Social outings also provide a hint about White House staff shake-ups. At the Kennedy Center Spring Gala, Michelle Obama brought along Valerie Jarrett, Rogers, her mother, Marian Robinson, and longtime friend Susan Scher. A month later, the First Lady named Scher as her new chief of staff.

Rima Al-Sabah, wife of the ambassador of Kuwait and a pro at reading the social tea leaves, followed that lead at her recent dinner for Michael Smith, the new White House decorator. Instead of seating the guest of honor next to two members of the social community, Rima and her husband, Salem, shoehorned Smith between White House aides Camille Johnston, Michelle Obama’s director of communications and Rogers.

“The ambassador and his wife seemed very happy Desirée was there,” said Lee, who, along with Linda Johnson Rice, chairman and ceo of Johnson Co., which publishes Ebony, leads the pack of socially in-demand black businesswomen. The stylish BET president says the social rush kick-started her calendar after the socially dull Bush years.

“Washington is opening up to a better mix of people,” says Lee, who adds: “Regular socialites are reaching out more to African-Americans than they ever did in the past eight years when Washington was fairly closed. People are trying different things, and we’re starting to see some of the same faces,’’ continued Lee, putting CNN’s Wolf Blitzer, philanthropists Catherine and Wayne Reynolds of the Academy of Achievement and Attorney General Eric Holder in the group.

Unlike in previous administrations — when the likes of Harriman and Graham used their personal wealth and White House access to bring glamour to the capital’s social scene — entertainment under the Obamas is more message driven. So far, Michelle Obama, who has ventured out to luncheons hosted by Sen. Dianne Feinstein and Heinz, prefers the role of mom and mentor to social trendsetter.

One evening in March during Women’s History month, when the President was out of town, the First Lady threw her own brand of White House dinner party, mentoring high school girls over dinner and entertainment in the East Room. BET’s Lee remembers: “Everyone was giggling because we had taken over the White House.”

The party started in the morning when she and other prominent women including Penny Pritzker, actress Kerry Washington and Google vice president Marissa Mayer were invited in for coffee. “We were then sent out in pairs to speak at local high schools, and later invited back for dinner. Each table had three mentors and seven girls, all recommended by their school principals. Sheryl Crow and Alicia Keys sang.”

Also at the party were Sasha and Malia Obama, along with their grandmother and select members of the White House staff such as Jarrett, Rogers and EPA Administrator Lisa Jackson. “It was a sit-down dinner, very emotional. Many of those guests never thought they would be invited to the White House for dinner,” says Lee.

Soon after Obama won the election, former secretary of state Madeleine Albright invited Chicago businesswoman Pritzker, chairman of the President’s National Finance Committee, to her Georgetown home for dinner with friends. On the guest list was Sheila Johnson, co-founder of Black Entertainment Television, who has her own hotel complex in Middleburg, Va.

“Penny Pritzker was new to Washington. I thought it would be nice to introduce her to people at a friendly dinner. I don’t do an awful lot of personal entertaining at my house. That was an exception,” says Albright.

Another veteran hostess paving the way for the next generation is former Clinton fund-raiser Beth Dozoretz. “This new group has a style that is very elegant, but down to earth,” says Dozoretz, whose favorite protégé, comedienne Wentworth, is married to George Stephanopoulos, chief Washington correspondent for ABC News.

Wentworth and her friends are confident and committed to putting an end to the Capitol’s reputation as a stodgy company town stunted by outdated rules of protocol and decorum and one that rolls up the sidewalks at 10 p.m. They know how to rally after midnight.

“Washington is starting to get a little more hip,” says Wentworth, who in June hosted an alfresco sit-down dinner for 40 at the couple’s Georgetown home to celebrate Rogers’ 50th birthday. Among the guests were decorator Smith, BBC Washington correspondent Katty Kay, “Sex and the City” writer Michael Patrick King, deputy White House Social Secretary Burnough, D.C. Mayor Adrian Fenty and his wife, Michelle, along with George and Liz Stevens, who are friends of her mother, Mabel “Muffie” Cabot, Ronald Reagan’s former social secretary.

Wentworth’s friend, Elizabeth Thorp, mother of three young girls, who runs her own public relations firm, also relishes the city’s new social pulse. In October, after GQ magazine’s 50 Most Powerful People in D.C. party, Thorp kept up the beat, partying into the night with Burnough and Senate Foreign Relations Committee staffer Nicholas “Nick” Ma, the son of cellist Yo Yo Ma. “I got back home long after my husband had gone to sleep,” she says, embarrassed to have “forgotten my house keys. I had to throw pebbles at the window to wake him up so he could let me in.”

As aspiring hostesses wait to see where the Obamas go when they finally do decide to step out socially, the First Couple’s aides, friends and longtime supporters can expect their invitations to keep piling up. And that’s just fine, if you believe in the benefits of a healthy play ethic.

“If you don’t make sure you’re taking care of all parts of mind, by reading and talking about things that are not related to politics, you can lose some of the breath that stimulates creativity in all kinds of areas,’’ says Ma, a guest, along with Wentworth and Stephanopoulos, at the Obamas’ party in May, the so-called poetry slam, to celebrate the power of the spoken word.

The young Harvard graduate, who last worked for McKinsey & Co. in New York and Shanghai, believes in the power of down time. “I’m not talking about going out in a hard-core way,” says Ma, who favors midlevel restaurants such as Birch and Barley. He also enjoyed catching Helen Mirren in “Phedre” at the Harman Center and Cate Blanchett in “A Streetcar Named Desire” at the Kennedy Center.

“You never know where creative thoughts come from,” says Ma. “So you have to make sure you stay open and experience as much as possible.”