LOS ANGELES — Interior design guru Greg Jordan went all out to mark the opening of his West Hollywood studio. Blaine and Robert Trump, who cohosted the evening with Linda and Jerry Bruckheimer and Kelly... 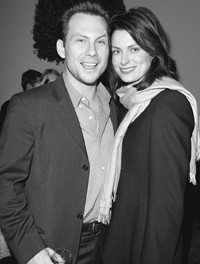 LOS ANGELES — Interior design guru Greg Jordan went all out to mark the opening of his West Hollywood studio. Blaine and Robert Trump, who cohosted the evening with Linda and Jerry Bruckheimer and Kelly and Cal Ripkin, flew in from a spa weekend in Phoenix via New York. “I hope we don’t lose him to L.A.,” sighed Blaine Trump. But Jordan, whose clients include the Kieselsteins, Libet Johnson and Ashley Judd, said he was “looking to achieve balance” in his life by dividing his time between coasts. Meanwhile, Hollywood’s power players, including Les Moonves, Steve and Jamie Tisch, Angela Janklow Harrington, Susan Becker, Liz Goldwyn, David Foster and Larry David packed into the tiny courtyard cottage, then wound their way through a dim back alley to get to dinner. Why the cloak-and-dagger routine? What was originally an evening for 24 at Jordan’s Hollywood Hills pad had swelled to 90, so the designer rolled up his sleeves and took over an empty dry cleaners — the future site of Marc Jacobs’ boutique — transforming it into a candle-lit garden with custom chandeliers, wrought iron tables and shrubberies. “Greg really knows how people want to live,” said Blaine Trump. “And he knows a lot about restraint.” Added her husband: “For a decorator to be able to make friends of clients, not only with the wife, but also with the husband, is pretty darn impressive.”