After a pair of European costume dramas last year, the Swedish actress is ready for Hollywood. 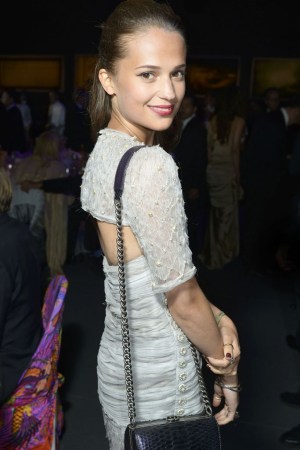 Alicia Vikander, the 24-year-old Swedish actress who’s lately caught the eye of casting directors the world over, says that when she first started out, the idea of breaking out of Scandinavia hadn’t even occurred to her.

“People ask me, ‘Did you dream of going to Hollywood?’ and the truth is, no. I hadn’t seen anyone else do it. Of course, I grew up with Greta Garbo and Lena Olin — and then there’s Noomi Rapace, who is almost 10 years older than me, who managed to do it with her film ‘The Girl With the Dragon Tattoo,’” the actress says a few days after making the rounds at the Cannes Film Festival. She’s at nearby Saint-Jean-Cap-Ferrat, where she was vacationing with friends.

Since landing the lead female role in 2012’s Oscar-nominated Danish costume drama “A Royal Affair,” playing opposite Mads Mikkelsen, Vikander has become a hot commodity. Joe Wright cast her in “Anna Karenina,” and she has a slew of upcoming projects. The fashion world has taken notice as well. During Cannes, she was reunited with Mikkelsen at amfAR’s Cinema Against AIDS gala in Cap d’Antibes, as a guest at the Chanel table.

Sporting a white cotton skirt and a fresh summery knit that set off her olive skin and hazelnut eyes, the actress had just returned from two months in Australia filming the crime thriller “Son of a Gun,” in which she stars opposite Ewan McGregor. Most of the scenes were shot in Perth, as well as some islands off Australia’s west coast. “We went to a mining town called Kalgoorlie. I’m kind of glad that was the only location where we only spent one day. It was in the middle of the desert, so hot, and they were down in the mines a lot of the time,” says Vikander, whose actor heroes include the Oscar-winning trio of Tilda Swinton, Cate Blanchett and Jennifer Lawrence.

Despite the breakneck pace of her ascent, the softly spoken actress remains grounded. Her fresh, unaffected air belies a resilience and steely focus that she attributes to her “Black Swan”-style training at the Royal Swedish Ballet School. At age 15, Vikander had to move away from her home in Gothenburg to complete the last three years of the nine-year course in Stockholm. (It is ironic now to think that Vikander didn’t get into her local stage school.)

“My profession now is very competitive, but you can’t compare it to how it is being brought up in that very intense world of training. The self-discipline that you get is incredible and it’s something, even if I don’t dance anymore, that I carry with me every day,” says the actress, who nonetheless got to flex her skills in the dance scenes in “Anna Karenina,” alongside Mikkelsen, also a former dancer. Vikander also learned a lot observing the career of her stage actress mother, Maria Fahl Vikander, whom she would often have to follow to the theater as a child.

“I’ve seen her work and I’ve seen how tough the industry is,” she says. “She’s probably the one not pushing me to become an actress but questioning me the most.”

Vikander says she feels the most at home when she’s on set: “Maybe now, being back here, doing press, that is the whole difference…the hysteria around films, and becoming a person that people think they know and that they make up thoughts about. That is the big difference when it comes down to my work. That’s where I feel the most safe.”

Vikander for the past couple of years has literally been living out of a suitcase, moving from “film to film, set to set,” with her next project set to be the Guy Ritchie-helmed remake of “The Man from U.N.C.L.E.”

“If there is any time in my life when I can run around and only have my suitcase with me, it is probably now,” she says. “Sometimes it’s the greatest relief because you’re open for anything, you’re living in the moment and if someone calls you and asks, ‘Can you be here tomorrow?’ then I can just go.”