All the Rage at Jude Law’s Latest Screening

Law, along with Lily Cole, Steve Buscemi and John Leguizamo, convened at Lower East Side boite The Box for a viewing of their newest film “Rage.” 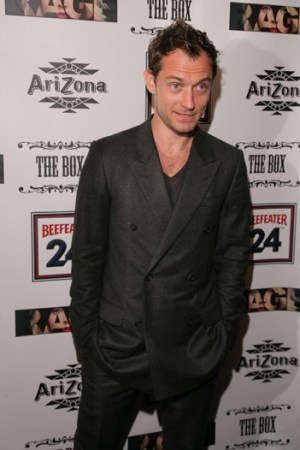 ALL THE RAGE: Lower East Side burlesque boîte The Box hosted a slightly more buttoned-up (though no less provocative) show on Monday night — a screening of “Rage,” a dark comedy about a series of murders that take place in a fictitious New York fashion house. Many of the film’s stars, including Jude Law, Lily Cole, Steve Buscemi and John Leguizamo were on hand to watch the flick, which is out now in theaters, on DVD and available online for download.

Buscemi, who plays one of the lone fashion outsiders in the cast, said he could identify with his character. When asked about the extent of his fashion knowledge, the actor said: “I wear clothes. That’s about it.” (He also added that he happens to be good friends with Nanette Lepore.)

Cole obviously had far more industry experience from which to draw — though the mannequin said “Rage” isn’t exactly true to life. “I think [‘Rage’] is a very extreme characterization of the values in the fashion industry,” said the Brit, who plays a catwalker named Lettuce Leaf, whose star has risen and fallen within a year. “It tackles a lot of different issues that do not strictly apply to fashion.”

Namely, the fact that Law stepped into drag for the project to play an Eastern European female model named Minx. “He’s a good-looking guy, so it doesn’t surprise me that he made such a good-looking woman,” said Buscemi.