The memoir, titled “A Story Lately Told,” is her first after a long and celebrated career in film.

By David Lipke and Erik Maza on November 21, 2013
View Slideshow 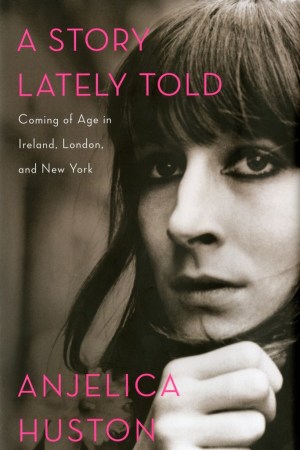 Anjelica Huston was at a signing of her new book, “A Story Lately Told,” Wednesday night at the Bookmarc shop in Manhattan’s West Village.

The book is her first after a long and celebrated career in film — one Academy Award, for “Prizzi’s Honor”; two nominations, including for “The Grifters,” and one criminally overlooked movie with Jim Henson puppets, the camp classic “The Witches.” The film career, despite an auspicious provenance — her father was the legendary John Huston — took off at 21, when she moved to Los Angeles after a tumultuous relationship with the photographer Bob Richardson and a stint modeling that landed her in the pages of Vogue as shot by Richard Avedon. It is that early life that informs the new book. Huston began working on it about three-and-a-half years ago, shortly after her husband, the sculptor Robert Graham, died.

“There was a moment where you take stock and you think, ‘Maybe I have something to talk about, something to offer other people. Some sort of life advice,’” she said. She wore a sequined pajama top by Marc Jacobs, natch.

“By exposing maybe a little bit more of what’s gone on inside me, I can make readers connect in a way to what they are doing in life with their own experience and how to overcome certain obstacles. I think it’s interesting to talk about one’s failures as well as one’s successes, especially when you’ve achieved a midlife point,” she said.

Huston used journals she’s kept her whole life and correspondence from both of her parents, the Academy Award-winning filmmaker and the ballerina Enrica Georgia Soma, to string together a narrative that stretches from her childhood in St. Clerans, Ireland, to the Chelsea Hotel in New York, where she lived with Richardson.

“At first I just wrote about stuff I wanted to write about, and then, as the segments came together, it started to take some sort of amorphous shape, and then I had to whittle away at it. It was very much like the editing process of making a movie,” she said.

A second installment titled “Watch Me,” which covers the 30 years after she moved to California, is out next fall.

The new book’s promotional rollout began Monday at the Monkey Bar in Midtown with a party by Vanity Fair. The magazine loves a good, nuggety celebrity memoir. It was not so long ago editor in chief Graydon Carter hosted a party in the very same room for Penny Marshall’s book, “My Mother Was Nuts.” Barry Diller was also in attendance then, as he was now.

“I’ve known Anjelica for most of my natural life,” the media mogul said. “We didn’t really grow up together, but it’s a lo-o-o-ng time,” he said. He had just finished catching up with Mike Nichols when he reached over for one of Huston’s books on display.

“I have to get one for Diane [von Furstenberg], my wife. She wanted me to bring one,” he said.

Among the other well-wishers was Bill Clegg, now a literary agent at WME and himself the author of two memoirs, which dealt with his addiction to crack cocaine and recovery.

Had he read the book? No one usually has at these parties.

“I actually have read the book. I’m her agent,” he said.

Huston approached Clegg when she had just started writing and it seemed to the agent her life had the elements necessary for a compelling memoir.

“Most rich lives have peaks and valleys, and Anjelica certainly has had those,” he said.

Diller and Clegg have at least one thing in common — they share the same favorite Huston movie, “The Grifters,” where she plays a ruthless matriarch and con artist.

“Oh my god, yeah,” Clegg said, referring to the movie. “Because she is so powerful and so sexy and at the same time so extremely girlish and vulnerable.” Clegg was in the anteroom of the Monkey Bar, and he now walked toward the restaurant, perhaps in search of his next celebrity memoir. Uma Thurman was also in the house.