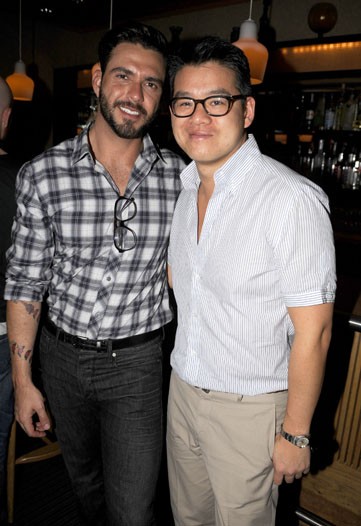 Dealers claimed that sales were up as Miami’s annual Art Basel fair opened Wednesday (although New York dealer Christian Hayes simply didn’t show up for his booth, provoking chatter about his financial state). The party scene, however, was more low key than in previous years.

The small group of scenesters who hit the town started with the cocktail party for Francois Nars “15×15” book co-hosted by the Chandelier Creative agency at the Standard hotel. Naomi Campbell showed up hand in hand with the makeup master. “I’m here for Francois,” said the supermodel, who had hit the fair earlier in the day. “I love art.”

Peter Som was at the fair for the fourth time, looking to pick up a few works on paper. “This is like their fashion week,” said the designer, who was happy to be on the sidelines. “I’m a total groupie.”

Among the crowd perusing the show of 15 photographs were Chandelier’s Lorenzo Martone, whose boyfriend Marc Jacobs posed for the book, Diana Picasso, Klaus Biesenbach, and Genevieve Jones. Meanwhile, scribe Anthony Haden-Guest gave an impromptu reading of two poems based on the art-world in the hotel’s lobby.

Calvin Klein hit a fete for up-and-coming artist Teresita Fernandez at the Setai, while Jefferson Hack hosted a buffet dinner on the Delano roof.

“I am an Art Basel virgin and I had to pop my cherry with style,” said the Another magazine publisher with a wicked grin.

He was celebrating the limited-edition artwork for sale on the mag’s Web site by the likes of Dinos and Jake Chapman. How did Hack pick the artists? “The ones who said ‘Yes’,” he said.

As the Misshapes DJ’d, model Liberty Ross, dealer Jay Jopling, artist Terrence Koh and designers Viktor Horsting and Rolf Snoeren stopped by to say hello. The Dutch duo, who are first-time fairgoers, are in town for a Friday party in their honor at the Webster boutique.

“I packed everything that is shiny and glittery for Miami,” said Snoeren, decked in a bedazzled blazer. “We always say that’s what we like in art as well.” The pair had shopped at the main fair but hadn’t found anything yet to purchase.

Afterwards, everyone headed down to the Florida Room for the Purple magazine/Design Miami soiree hosted by Le Baron to party the night away.