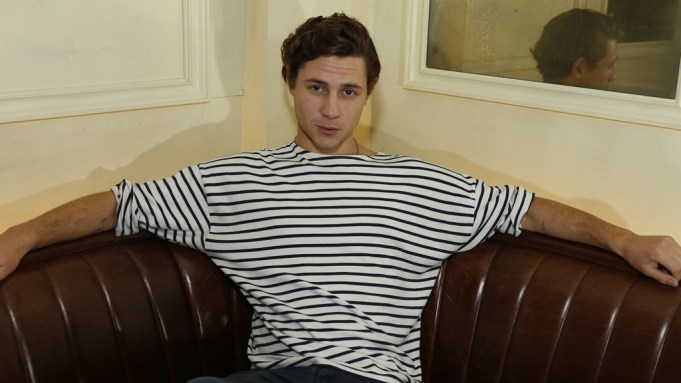 Augustus Prew breezes into Midtown Manhattan bistro The National on a recent balmy June afternoon all apologies and exasperation. The 25-year-old actor is 20 minutes late. “I am so, so sorry,” Prew says, his boots scuffing across the restaurant’s black-and-white tiled floors as he hurries over to a corner nook. “You will not believe the morning I’ve had.”

He speaks emphatically but with an easy Brit cadence, peppered with the occasional “f–k” for emphasis or boyish, aw-shucks grin to up the heartthrob quotient. He is charming and has the boy band good looks — soft brown eyes, a chiseled jawline, hair swooping across his forehead — to boot.

“So I woke up and the room service guy delivers breakfast and I’m like, ‘OK, hi, thank you, dadadada, let me get you some money,’” Prew says, acting out the exchange.

Prew spent the morning searching high and low for said wallet, which held not only his money and credit cards but also the actor’s passport and visa.

“I’ve been retracing my steps, doing a little tour of the city all day between all these meetings,” he says.

Prew’s been taking various appointments the past few days while in New York to promote his two upcoming projects: “Copperhead,” a Civil War-era indie film out on Friday that centers on a bucolic town in upstate New York, rankled by an unfolding political climate, and, on the other end of the spectrum, “Kick-Ass 2,” the second action-adventure-comic-book effort from director Jeff Wadlow.

The actor is only in town for a few days. He’s a recent Los Angeles transplant, having moved there a year ago from London, where he grew up. “I was always interested in acting,” he says of his upbringing. “Starting around seven or eight, my mates and I would spend our time creating plays: writing, devising, sketching scenes, making props and puppets. We’d even charge the parents to get in.” At 10, he joined the Youngblood Theatre Co., which boasts alums Imogen Poots and Carey Mulligan. Soon, he landed a small role in “About a Boy,” and later, spots on “Dexter” and “The Borgias,” and a supporting role in “Charlie St. Cloud.”

“I seem to have a knack for playing outsiders. It’s bizarre,” Prew says quizzically. “It’s not deliberate. I guess I’m just drawn to people who have a little bit of unexpected depth to them and sort of buck the trend a little bit.”

In “Kick-Ass 2,” due out later this summer, he continues the outsider streak. In the buzzed-about sequel to 2010’s much beloved by a certain segment “Kick-Ass,” Prew plays Todd (his superhero name packs a little more punch: Ass-Kicker), the best friend of school nerd/masked vigilante Dave, aka Kick-Ass. Prew’s role was filled by Evan Peters in the original, but due to a scheduling conflict, Peters couldn’t continue.

“So in came the opening for sloppy seconds over here,” Prew chuckles, slicing into his piece of grilled branzino. “And I decided to take on the role. I was like, ‘All right, why not?’”

Prew has never taken an action role before, never mind one that required a stretchy costume. “It’s not even a little bit comfortable. I mean, it’s like you’re wearing a f–king wet suit of latex.”

Though the film had its difficulties, Prew is pumped to be part of the franchise, which has boosted the profiles of stars Chloë Grace Moretz and Aaron Taylor-Johnson.

“I loved the first one. I thought it was genius and unlike anything else I’d ever really seen before,” he says of the hyper-violent, irreverent comic-book adaptation. The sequel promises to be equally subversive. “The film plays to the format. It’s very self-aware and ironic, almost sardonic.”

As for the wallet saga, Prew, as it turned out, would be able to make it back to Hollywood to continue his summer ascent after all. After a six-hour search, it was found safely stuck behind the radiator in his hotel room, a discovery he made while on the phone with the American consulate in hopes of expediting his new passport.

“I’m talking to her and panicking like, ‘I have to be in L.A. next week — ’ then, bam!” He slams down on the marble tabletop. “I look down and it was right there, scrunched up in the corner the whole f–king time.”

Prew chalks up the discovery to, of all things, a rock.

“It’s blue agate,” he says, pulling the small, cerulean-colored pebble out of his pocket. “It brings you tranquility.”

He had been on a photo shoot earlier, and the groomer who styled his hair to disheveled perfection had sensed his panicky state. “She accidently brought two stones with her today, and she was like, ‘That’s really weird, because I have no idea why I have two, but you sound like you’ve had the sh-ttiest day ever and you need it, so here you go.’ And you know what? It kind of helped.”

When his story is met with a furrowed brow, Prew blushes.