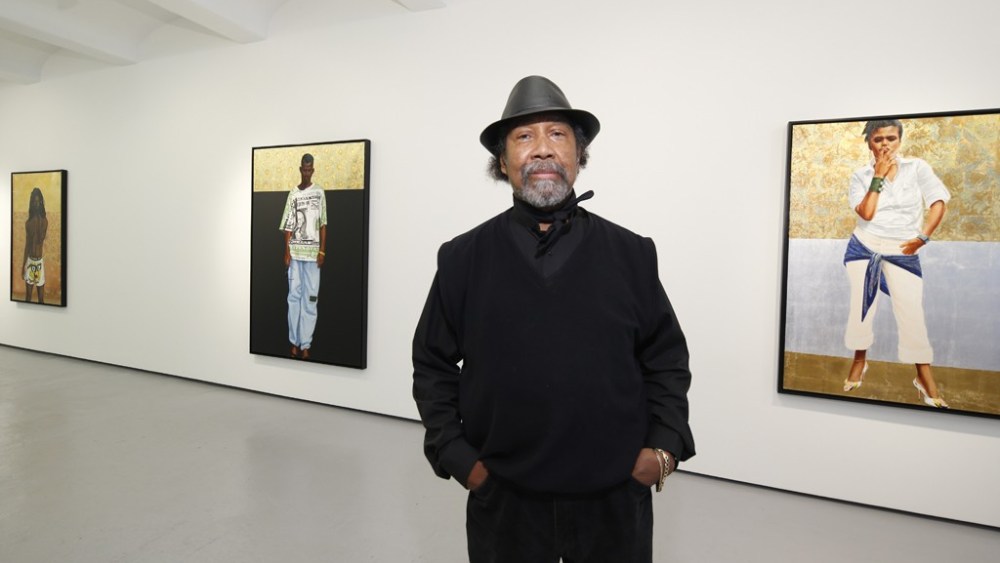 Barkley L. Hendricks has his own distinct sense of dress. On a recent mucky day, the artist is in a gloomy monochromatic ensemble: black loafers, black jeans, black vest over a black oxford, and a black handkerchief wrapped around his neck, accentuating his fuzzy salt-and-pepper goatee. His accessories have a little more quirk: a leather fedora, a trio of chunky gold chain bracelets and a toothpick tucked discreetly behind his ear.

He’s milling about “Hearts Hands Eyes Mind,” his new exhibition on display until April 6 at Jack Shainman Gallery in Manhattan’s Chelsea neighborhood. Its stark white walls are punctuated by the brightly hued paintings and graphic photographs on which Hendricks has built his more-than-40-year career. He first gained notoriety in the Sixties and Seventies for his portraits, which often depict full-figured, African-American subjects whose distinct sense of style were reflective of the urban street culture then on the rise.

“Fashion is a situation we all find ourselves in every day, when we wake up and have to put on clothes,” Hendricks says.

Both Peter Som and Derek Lam have cited him as a source of inspiration for recent collections. “There’s a statement we all make with clothes and it’s a contribution to the culture that surrounds us.”

When it’s time to pose for his own portrait, he puts his hand in his pocket, stares down the lens and doesn’t move a muscle. It’s that unshakable sense of confidence to which Hendricks is drawn. His one requirement when selecting a subject? “Attitude.”

Lately, Hendricks’ fascination with street style has led him to a focus on footwear. He admits to having procured thousands of heels over the years to accessorize his subjects. “I don’t wear them though,” he stipulates. “Do you see her shoes?” he asks, motioning to a piece, “Triple Portrait: World Conqueror.” In the painting, a brassy Latina woman is sucking down the last bits of a cigarette, wearing a pair of white slingbacks with Marilyn Monroe’s visage emblazoned on them.

“You know that Marilyn Monroe quote right?” Hendricks asks before illuminating. “‘Give a woman the right pair of shoes and she can conquer the world.’”