Screenwriter Joe Eszterhas reflects on life away from Tinseltown. 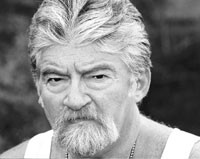 NEW YORK — Screenwriter Joe Eszterhas brought the world what are generally considered some of the worst films of the Nineties — “Sliver,” “An Alan Smithee Film: Burn Hollywood Burn,” “Jade,” “Showgirls” and, depending on your perspective, “Basic Instinct.”

But, despite not having had a movie produced since 1997, moving away from Hollywood and back to Bainbridge Township, Ohio, where he grew up, and fighting throat cancer, Eszterhas hasn’t stopped chugging along. In 2000, he published “American Rhapsody,” a treatise on the national state of affairs, some of which was told from the point of view of Bill Clinton’s penis. Now, Eszterhas’ internationally renowned inflated ego serves up a 736-page memoir titled “Hollywood Animal” (Knopf).

“I was approaching 60 and I suddenly found myself combating a very serious illness,” Eszterhas says in a telephone interview from his home. “I thought that I wanted to put the story of my life down while I had time and while I felt that I could still write and remember.”

And remember he does. In “Hollywood Animal,” Eszterhas jump-cuts back and forth between his youth as a Hungarian immigrant living in Cleveland and his burgeoning career leading up to being the highest-paid screenwriter in the world. Along the way, he makes friends, enemies and friends who become enemies; he accelerates careers (including that of Sharon Stone, whom he says he “created,” and with whom he had a one-night stand that he describes in not-especially-lurid detail); he takes potshot after potshot (usually deserved) at producer Robert Evans, who often appears incapacitated; he includes ruminative diary entries from his second and current wife, Naomi, about her ex-husband, Bill Macdonald, who later married Stone, and he brags time and again about having creative control over his screenplays — and God forbid if a director or producer changes a single word.

Regardless of the hubris involved in expecting any reader to slough through a book of this length, Eszterhas still knows how to tell a story, and his tales, no matter how they’ve been rehashed in the Hollywood trades, retain an unbridled fascination.

“The piece of wisdom that my old agent, Guy McElwaine, gave me when he said that the town runs on greed is absolutely accurate,” Eszterhas explains. “People are scared s**tless from the moment they hit the floor in the morning, and that terror is pervasive. L.A. is almost a separate nation in terms of the way the industry feels. It’s not a real world —the seduction, the glamour and the money — it’s all overwhelming. And people have a tendency to lose their footing, which is why sometimes their behavior isn’t very humane.”

Though his body of work runs the gamut from the autobiographical “Telling Lies in America,” which was his most critically heralded screenplay, to a children’s movie called “Big Shots” to “Flashdance,” Eszterhas’ movies parallel the issues he faced while working in Hollywood — and conclude that you can’t trust anyone. “Jagged Edge,” “The Music Box” and “Basic Instinct” all feature surprise endings, where characters who’ve perpetually proclaimed their innocence turn out to be guilty after all.

“We always remain strangers to each other,” Eszterhas says of this overarching theme. “No matter how well we think we know each other or how intimately, there’s a part of us that always remains strangers, and I think I’ve been fascinated by that.”

As for “Showgirls,” which grossed a mere $20 million in 1995 but remains a staple of campy midnight showings and late-night time slots on cable, Eszterhas thinks the humor he says he always intended “is finally being appreciated.”

“You have no idea the number of people over the years who’ve come up to me and whispered in my ear, ‘Boy, we really loved “Showgirls,”’” he says.

In his battle against throat cancer, Eszterhas gave up smoking and drinking, which were inextricably linked, for him, to the act of writing. “It took some time to be able to feel straight and in command again without the drugs I needed from the time I was a kid,” he says. He’s taken up a campaign against smoking in America, and though he says he still gets Variety and the Hollywood Reporter, he has a hard time staying interested in the politics of Tinseltown.

“I found myself getting burned out on movies because you know too much about the process. You know what hassles were on that picture,” Eszterhas says. “You know too much internal stuff that has nothing to do with what you’re watching onscreen and that ends up distracting you. And I’ve found here in Ohio, after about a year-and-a-half of being physically away from Hollywood, my wife and I have really started enjoying movies again.”