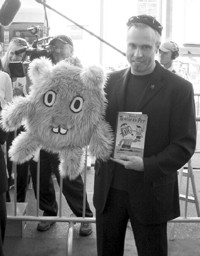 LOS ANGELES — Artist Gary Baseman is among the rarest of cult figures. He is worshipped by the hippest of the hip who collect his subversively quirky work as well as by the kids who tune into his animated series, “Teacher’s Pet,” on the Toon Disney network.

With the big-screen, feature-length version of the TV show opening in theaters this weekend, Baseman could kiss his underground status goodbye. After all, right up there on the marquee is his signature next to Disney’s. And the cast of voices for his roughly hand-drawn characters isn’t exactly fringe. Nathan Lane, who won an Emmy for his role in the TV series, voices a dog whose attempts to realize the dream of becoming a boy have disastrous results. (Kelsey Grammer, Megan Mullally, and Paul Reubens also star.)

Like the former PeeWee, Baseman doesn’t dumb down his art for the kids. The movie is cute, sure. And the songs are catchy. But the look and the laughs play on a sophisticated level. Even Baseman’s inclusion of several Disney icons, the twisted Pinocchio story arc notwithstanding, is done irreverently.

“I actually had to fight to keep some scenes in the way I wanted,” says Baseman. One top exec didn’t understand why a sky had to be yellow in a scene. Luckily, for the surrealist sake of that moment in the story, another one above him did. “I love things with a double meaning,” he adds. “Things that are wrong, but also right.”

That’s a fairly apt description of the Dunces, his new tiny toy figures produced primarily for Japan but sold at specialty shops in the states. Names like Retardey for the always-late Dunce won’t go over with the PC police, but there’s also nothing inherently wrong in the word, he noted. Dunces is also the subject of his gallery show here, opening Feb. 6 at La Luz de Jesus.

As if he wasn’t busy enough,Baseman is looking forward to the release this spring of the first, all-encompassing book of his work and inspirations. The 352-page tome is called “Dumb Luck,” after the freaky rabbit he created who coddles his lucky rabbit’s foot — although having it means he foolishly ended up with a peg leg.

Quips Baseman, who’s won three Emmys and a BAFTA for the “Teacher’s Pet” series: “I describe my art as the place where the line between genius and stupidity is smudged beyond recognition.”