The actress stars in the big summer comedy “Blended” alongside Drew Barrymore and Adam Sandler. 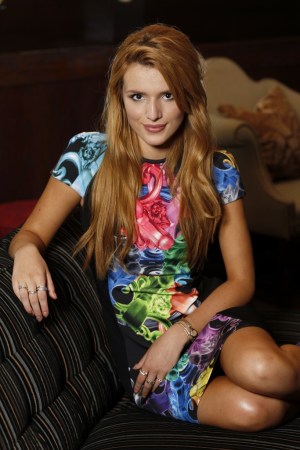 Bella Thorne looks no worse for wear having flown to New York on the red-eye from Los Angeles. She arrives at Aretsky’s Patroon in Midtown on a recent Friday wearing a multicolor Versus dress, her legs looking impossibly long in platform shoes, her strawberry blonde hair cascading down her side. Picking at an avocado appetizer, she describes her life, which she claims only sounds glamorous.

“Sometimes I want to lay in my bed, watch ‘Bones’ and eat Cup [of] Ramen,” she says.

Thorne has a long track record on television, but she’s now starring in her big screen break with two comedy veterans, Drew Barrymore and Adam Sandler, in “Blended” —which opened Friday — and has a number of major productions on the way, including “Alexander and the Terrible, Horrible, No Good, Very Bad Day” with Steve Carell and Jennifer Garner. She also recently released a single, “Call It Whatever.”

While her comedic timing is evident in “Blended,” her life hasn’t been all laughs. Thorne tells a touching story about being bullied as a child. “Kids are so mean,” she says. “I do a very big antibullying campaign because of my history. I go to [elementary] schools and high schools and give a speech about bullying. It floors me how mean kids can be. Even on Instagram, they comment on someone’s looks. I say, ‘Why do you shame your bodies?’”

Thorne, who is now 16, has been home schooled since third grade. “I’m dyslexic,” she says. “I was writing backwards. It could not have been more obvious.” But none of her teachers picked up on the problem. It took Sylvan Learning Centers to suss it out.

Meanwhile, Thorne got into modeling. “Nobody wanted to be friends,” she says. “They called me ‘the pretty dumb girl.’”

Thorne is best known for her role as Ruthy Spivey in the TV series “My Own Worst Enemy.” She also plays Tancy Henrickson in the fourth season of “Big Love” and CeCe Jones on the Disney Channel original series “Shake It Up.”

In “Blended,” Thorne plays Sandler’s oldest daughter Hillary, who dresses in sweats and T-shirts, and is mistaken for a Larry — Sandler’s character’s nickname for his daughter.

“Adam Sandler said he was thinking of me when he wrote the role,” she says. “I had an audition where I had to look like a boy. I’m already a tomboy. They did face shading and glued a wig to my face and head. I was in my makeup chair for two hours every day.” Her character, she says, is shy and awkward and wants to jump out of her own skin, until Barrymore’s character takes her under her wing and gives her a fashion lesson. “She’s 15 and wants to be a girl and have her first crush and have people stop mistaking her for a boy,” she says.

During the production, the young actress developed a daughterly bond with Barrymore, herself a child star.

“Drew calls me Pickles. She’s a cross between a mom and a sister. They thinned my hair for the part and Drew saw how uncomfortable I was. She gave me hair vitamins,” which, she quipped, have had the added unwanted effect of growing thicker hair on her legs.

Thorne has two other, more serious — and hopefully more successful — movies in the can after “Blended,” which has bombed at the box office and with critics. In “Big Sky,” she’s a teen traveling with her mom when a gunman attacks them and “Home Invasion” is about a family that becomes imprisoned in their own home by intruders.

As if singing, acting and modeling weren’t enough, Thorne is also a striving designer. She designed with her sister a collection of occasion dresses for proms and quinceañeras. “It’s such a big deal to turn 15 in the Latin community,” says Thorne, whose father is Cuban. “It’s looked at as just as special as your wedding day.” The collection, for Sherri Hill, had a runway show at the recent Miami Fashion Week. In fact, Thorne is a fashionista. Besides Versus, her other favorite brands are Alexander Wang and Zac Posen.

While Thorne is accomplished in so many areas, she still has a teen’s preoccupations, such as learning how to drive. “Thinking about driving almost feels like me having panic attacks,” she says. “It makes me hyperventilate.”

She’s unfazed, however, by people asking for autographs, although she tires of dressing up to go to the supermarket and dislikes when people snap her picture without asking.

“I just want to be me sometimes,” she says. “I don’t always want to look like what ‘Shake It Up’ looks like.”