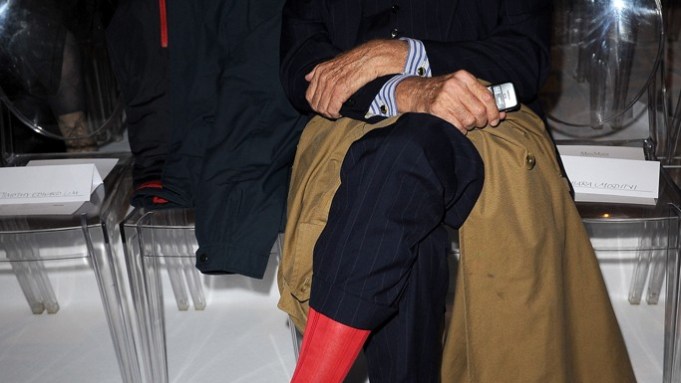 A fashion show in Milan would be incomplete without him—and his scarlet ankles.

As honorary chairman of Italy’s Camera della Moda, and once dubbed “the prime minister of fashion” by WWD, Beppe Modenese has been sitting front row in Milan for more than 50 years, his rakish red socks peeking out from his trousers for decades.

In fact, Modenese started on the fashion circuit in 1954 in Florence at the Sala Bianca, then was instrumental in bringing fashion to Milan in 1978. Eleven brands showed that first time, including Krizia, Giorgio Armani, Missoni, Ken Scott, Laura Biagiotti and Gianni Versace. “It started out as a very selective and exclusive event, but fortunately it then evolved and expanded,” Modenese says. All this should be detailed in a book on his life, due out in May, cowritten by Modenese and Italian journalist Roberta Filippini.

Not one to limit himself to a single, if enduring, fashion statement, Modenese is an astute collector of pendulum clocks and cuff links. He designed the cuff links himself with Faraone jewelry in the mid-Eighties. Designs include stars and the moon in gold, burnished steel and rubies or sapphires. One of the pendulum clocks is shaped like a cross-eyed billy goat with moving eyes.

But what exactly is behind Beppe’s signature splash of red? “I was friends with Polish-French modern artist Balthus, who always wore red socks, with wooden clogs. He told me it was a porte-bonheur [for good luck]. It started as a joke, but then I grew to really like them. I only wear red socks with brown shoes, and I have around 50 pairs—all in cotton.”