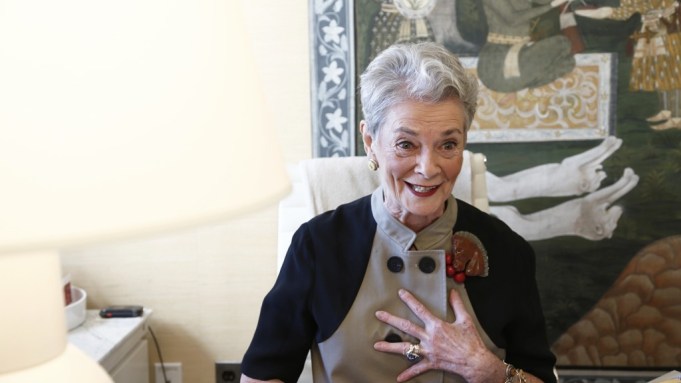 The sunstruck Friday morning before Labor Day found Betty Halbreich right where she has been for 37 years: working away in her salonlike Bergdorf Goodman office.

The personal shopper sees herself beyond any dressing-room mirror. Never one to sell solely for price or a label, Halbreich prefers to size up her clients inside and out. Occasionally glancing out her window to joke about the under-dressed people traipsing into The Plaza hotel, the octogenarian has a bifocal-like vision of fashion’s past and present. “ ‘Patients,’ I call them. They open up to me like a therapist. It’s very difficult to describe what I do,” Halbreich says, who runs Solutions in the Fifth Avenue store. “Yesterday I said, ‘Basically, I’m a clerk’ — a very costly clerk for 37 years. Glug.’ ”

In her new book, “I’ll Drink to That: A Life in Style, With a Twist,” (Penguin Press) Halbreich is equally unsparing about her own challenges: a frayed marriage, her attempted suicide, the struggles of motherhood, overcoming polio and then cancer. Fashion, of course, is a thread that runs through it all. Retrieving a list from a remarkably orderly desk drawer, Halbreich (whom friends nicknamed “Mrs. Sponge”) rattled off “Lauren Bacall, Betty Buckley, Susan Lucci, Jane Pauley — I taught Candice Bergen to walk in heels — Gwyneth Paltrow, Jane Curtain, Sharon Stone — I don’t even remember her — Julia Roberts, Bobbi Brown, Estée Lauder — that was something — Babe Paley, Farrah Fawcett. These are the people who were great to work with. The ones that I didn’t keep a list of weren’t so great to work with.”

What isn’t so great is how stylishness has lapsed. “We dressed — that’s what’s different. You went to El Morocco on Saturday night and tipped the head waiter heavily to get a table. You didn’t think about going out not dressed. When you went into a store — let’s say Bonwit Teller or Lord & Taylor — you got dressed up,” she says. “You wouldn’t walk around in shorts or tight white pants. That’s my new obsession. I hate white pants. Have you noticed everyone is walking around in tight white pants — large, medium, small? They are so awful. I just can’t wait until people put their coats back on in winter and hide all this provocativeness.”

Reading from another note, Halbreich says of longtime client Joan Rivers (who had planned to cohost before her recent hospitalization, with Michael Kors, Halbreich’s Thursday-night book party), “I wrote this in 1998: ‘Perfection in style. Alterations slim her down because she likes to look smaller. Loves color, trendy, cutting-edge, works very hard.’ ”

Now that her second book is squared away, Halbreich and “Girls” creator Lena Dunham are teaming up for a new HBO show. “Do you know what a thrill this is for an 86-year-old woman to be working with a 29-year-old? I’m not sure what we’re going to do — probably laugh a lot and get nothing done,” Halbreich says.

Halbreich doesn’t subscribe to HBO, doesn’t use e-mail and relies more on a landline than her cell phone. Being adverse to technology isn’t a new habit: Early on in her career, she routinely handed off sales to other associates to avoid having to do the cash register. That was a practice that irked Geoffrey Beene, since she ran his boutique on Bergdorf’s second floor. “I just stood there and told people how to dress,” she says.

When Halbreich moved up a floor to Solutions after successfully pitching the idea to Ira Neimark, Beene plastered a letter on her office door, stating, among other things, “How could you leave? When you were sick, I saved you from a mental institution.” She continues, “I took it to the head of the company and said, ‘Here, you read it. Do you want me to stay or to go?’ ” (Interestingly, Halbreich and Beene became lifelong friends, and she considers him “a genius.”)

Beene’s former assistant, Alber Elbaz, is another winner in her book: “So intellectual, a very smart man…but there’s no remnants of [Beene]. That’s being very sure of yourself.” (Libertine’s Johnson Hartig is a favorite for his intellect, as is makeup designer Edward Bess.)

Christmas shopping with Walter Cronkite was a highlight. “He was color-blind. He was the dearest human being,” Halbreich says. “People would hear his voice and turn around on the first floor because it was so unique.”

Teaching former President Gerald Ford how to properly carry a garment bag with a freshly pressed and altered dress for his wife, Betty, also made for an unforgettable workday. “It had just been pressed and finished. He took it and wrapped it over his arm like he was taking his shirts to laundry. I said, ‘Oh, for God’s sake. She’s going to wear that dress tonight,’ ” Halbreich says. “He said, ‘I can’t believe Betty’s telling me how to carry a dress.’ I said, ‘At least I’m not telling you how to run the country.’”

She continues, “They had a wonderful love affair. She came out of that dressing room and showed him every dress. And his appreciation for her was written all over his face.”