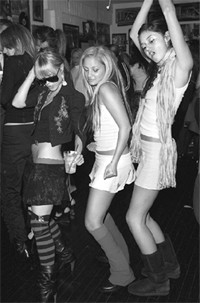 With the thermostat at Hue turned way, way down to suit all the ladies swathed in his furs, Dennis Basso greeted a gaggle of glamorous types at a dinner Marjorie Raein, Rena Sindi and Jeff Klein threw in honor of his new store on Monday night. The dress code called for bling-bling, but then, guests like Tory Burch, Samantha Boardman, Alex Kramer and Nina Griscom go bling every day.

Emilia Fanjul Pfeifler wasn’t sure that her husband knew what the phrase meant, “though he says it all the time.” Aerin Lauder certainly knows her bling, but in a sassy move she turned to J. Mendel for her leopard spotted fur.

Bettina Zilkha determined that her own Basso fur was the “bling-iest.” The bling-iest by far, however, was Marisa Noel Brown, who had given birth to her first son, Ford, only 10 days before and already looked better toned than most rap video chicks.

Meanwhile, on the West Coast, a riot of PYTs helped rock chick Taryn Manning celebrate her 25th birthday with friend Siri Garber last week at HQ Gallery in Hollywood. The carnival-themed bash — giant lollipops, a popcorn cart, a baton twirler and a balloon-wielding clown —raged until the wee hours with Manning writhing on the dance floor among a swarm of girls dressed in her signature miniskirt and short boots, while DJ Samantha Ronson played plenty of tunes from her “Boomkat” album.

The birthday girl’s own cropped jacket came with built-in blinking red lights (bling, bling) and was the hit of the party, until it went dead. “It belonged to my mom once upon a time,” said Manning. “Maybe I should have checked the batteries first.”