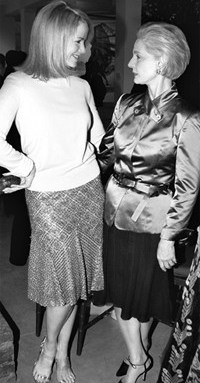 Though they were at Christie’s to see the spring Burberry Prorsum collection, Tory Burch, Jennifer Creel, Sloan Lindemann and Blair Hussein couldn’t take their eyes off of fine jewelry the auction house will sell off on Dec. 12.

Adelina Wong, Cynthia Lufkin and Alexandra Lind-Rose were especially excited about Lot 131, a yellow sapphire and diamond ring. “It’s so affordable — between six- and eight-thousand dollars!” said Lind-Rose, who would have bid right then and there if she could have. “You’re all going to show up wearing dark glasses and try to outbid me, aren’t you?” she scolded her tablemates.

Downtown that evening, Matthew Barney hosted an installation with puppets by Hans Ulrich at the Dia art center, and Barney’s love interest, Björk, was the one aiming for anonymity. She timorously shook off a reporter’s question about her outfit: “I was just, like, a visitor,” the Icelandic chanteuse peeped. “I’m going to sneak off. I’m just going to go.” And off she went.

Fashion stars like Calvin Klein, Michael Kors, Natasha Richardson, Karolina Kurkova and Mario Testino split, too, once they realized the photo auction to benefit God’s Love We Deliver was actually next door. There every guest, including Richard Gere, Renee Rockefeller and Diane von Furstenberg, was ready to face the flashbulbs and talk fashion. After all, the event was held in honor of Herb Ritts and was co-hosted by Klein, Kors, Richardson, Blaine Trump, Anna Wintour and John Dempsey.

Carolina Herrera wandered from lot to lot with a “beautiful, beautiful,” while Oscar de la Renta made plans to bid on an image of one of his dresses, as snapped by Annie Leibovitz. “I’m going to sing,” threatened Kors as he approached the podium with a microphone in his hand. Thankfully, he didn’t, but spurred on bidding instead. The event raised more than $500,000.