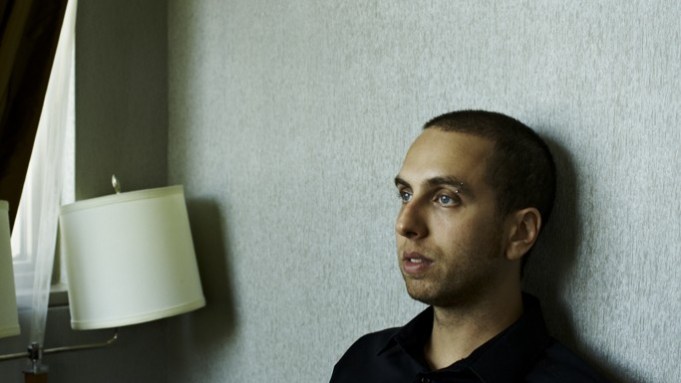 In director Brandon Cronenberg’s dark, futuristic satire “Antiviral,” the days of simple, scribbled celebrity autographs have long passed. Inspired by a dream experienced during a bout of the flu in 2004, Cronenberg’s first full-length film plunges audiences into a lab-white world that has literally grown sick from its addiction to celebrity. In this bizarre realm, fans pay millions to be infected with viruses harvested from ailing stars, and rush to own the cloned flesh of the rich and famous to commune more intimately with their Hollywood heroes.

Appalling though this may sound, this petri dish of perversity was logical to the 33-year-old son of acclaimed director David Cronenberg — the man behind such body-horror classics as “Videodrome,” “Scanners” and “Shivers.”

“After my fever dream, I obsessed over this idea that something from another person’s body was inside me making me sick,” Cronenberg told WWD at the 2012 Toronto International Film Festival. “The more I thought about this odd, biological intimacy we share with people when we get sick, I knew I’d found a metaphor I could use to discuss the societal and moral costs of taking celebrity worship to the extreme — even to the point of being grotesque and dangerous.”

“I’m not predicting the apocalypse here, and if people want to own my DNA one day that would be great. I’d give it away for free,” Cronenberg grinned. “I’m simply taking today’s mania to get inside celebrities one step further.”

To supplement his income at the clinic, March smuggles these viruses off the premises in his body and sells them on the black market. The plan succeeds and profits everyone concerned. But all that changes after he injects himself with a rare virus that ails and ultimately kills Hollywood’s new “It” girl (Sarah Gadon).

The final film — now six minutes shorter than the version screened at the 2012 Cannes Film Festival — is a visceral, if icky, explosion of sights, sounds and imagination. In fact, some critics have likened “Antiviral” to the early films of Cronenberg’s father. The younger Cronenberg doesn’t necessarily agree.

“My dad has made some amazing movies, so I understand why people will wonder if I’m a chip off the old block. But my work has been influenced by others: Saul Bellow, Kurt Vonnegut, Franz Kafka. I didn’t turn to filmmaking to become a carbon copy of my father,” said Cronenberg.

As a youngster growing up in Toronto, Cronenberg wanted little to do with making movies. “I was put off with the idea for a very long time,” he said. During his teens and early 20s, Cronenberg wrote and studied philosophy and the visual arts but still felt something missing from his life.

“I was living a very scattered creative existence,” said Cronenberg. “I just didn’t know what I was doing with myself and I was quickly nearing an age where I needed to focus and start getting good at something and get a job.”

In 2004, a 24-year-old Cronenberg joined the film program at Toronto’s Ryerson University and began to embrace the art form that he had shunned all his life.

“Instead of running from it, I finally realized that filmmaking could unite all my creative interests in a totally new way. I wasn’t going to miss out on that just because of people’s preconceptions about me,” said Cronenberg.

Still, the budding director is grateful for the lessons learned while watching his father build his film career.

“Nothing surprises me about this industry. There are many ups and downs. But what has surprised me is how easily this first film came together,” said Cronenberg. “I don’t know what my next film will be. I can only hope that I will be this lucky again.”