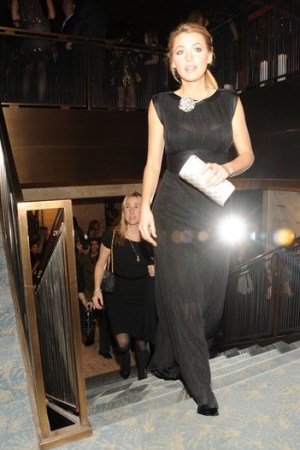 The Four Seasons restaurant was the appropriately named site of Wednesday night’s Fete d’Hiver, hosted by the Associates Committee of the Society of Memorial Sloan-Kettering Cancer Center and sponsored by Chanel Fine Jewelry.

“Am I dressed up enough?” fretted one young guy to a friend. “I don’t understand what ‘festive dress’ means.”

Certainly honorary chairs Diane Kruger and Blake Lively are familiar with the term, considering the sheer number of events they manage to squeeze in.

The criterion for their choices?

“I work with Chanel as an ambassador for the brand and they’re one of the few who always give back,” explained Kruger of her presence. “I usually only go out when I have a movie to promote.” And she has little problem saying no. “When you’re a girl you have to think about what to wear — it becomes a lot.”

Lively takes the pre-party ritual all in stride. “I’m pretty used to doing it at this point — I can [get ready] very easily,” she shrugged between signing autographs for adult fans, adding, “Tonight was a double whammy: I’m a big fan of Chanel and I love the pediatric center element.” (All of the event’s proceeds went towards the Clown Care program in the center’s pediatric department).

Guests enjoyed a beet salad and filet mignon dinner in the Pool Room and a live auction in which Kruger took the mic to sell off a trip to Paris, including tickets to a Chanel show and a private tour of Coco Chanel’s apartment.

After a dessert including white clouds of cotton candy, the Misshapes took over the dance floor though most watched the World Series on the bar’s TV.