The leading role in the new Alexander Payne film is getting Dern, 77, the best reviews of his career and may earn him an Academy Award nomination. 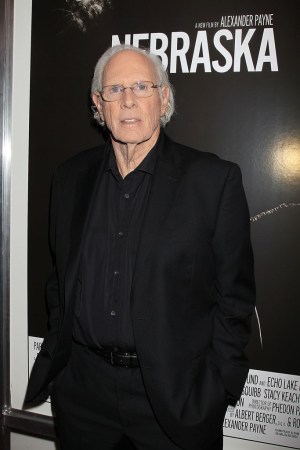 Bruce Dern is at Brasserie 8 ½ in Manhattan on a recent evening picking on some pasta Bolognese.

It’s the after party for a screening of “Nebraska,” the new movie from Alexander Payne that opens Friday and stars Dern in the leading role.

At 77, the part of Woody Grant, a beaten-down Midwesterner seemingly slipping into dementia, is getting Dern the best reviews of his career and may earn him an Academy Award nomination. He already won the competitive best actor award at the Cannes Film Festival in May.

Actors of Dern’s vintage are only called on by Hollywood to accept lifetime achievement awards or to play lovable codgers out for one last hurrah in buddy comedies — “Last Vegas,” “Stand Up Guys” and “The Bucket List” are just a few recent examples. But this year, two of their cohorts have meaty, career-crowning roles, and Dern and Robert Redford, earning raves portraying Our Man in the stranded-at-sea saga “All Is Lost,” are touring the awards circuit like it’s 1974.

The recent tide of goodwill has brought the two actors together almost 40 years after they costarred in “The Great Gatsby,” where Redford played Gatsby and Dern played Tom Buchanan, naturally.

Dern is asked to assess his old costar’s performance.

“I thought his courage to take part in the movie on his own when he’s like 76 or 77 or whatever he is like me was fabulous, and I thought he did a good job. And when I saw the movie it was typical Redford because the guy is not going to die. Ever. Even Jeremiah Johnson doesn’t f–king die,” Dern says, referring to Redford’s 1972 film.

Because Dern, in a career that spans 50 years, has perfected the curmudgeon look, he seems like he would be ornery in life, too. But he carries himself like he’s still riding on one of those choppers with Peter Fonda in “The Wild Angels.” He’s dressed in all black and wears a goofy grin on his face that seems to say he can’t believe his dumb luck to still have work at his age.

“I don’t know about me, but I’m sure he will be nominated,” he says, referring to Redford. “The win for me was getting the role.”

Dern cut his teeth in Roger Corman’s Sixties biker movies alongside Fonda, Jack Nicholson and Dennis Hopper, but he never really earned, or chased, the leading-man status of those guys.

Instead, he gravitated toward character parts, happy to step up whenever Hollywood needed an unhinged whack-job. So a career triumph this late in life has an element of redemption, like he’s getting discovered all over again.

He had just walked through a throng of well-wishers and is stationed at a booth near the back, away from all the premiere hubbub. His most enduring relationship from the New Hollywood years remains Nicholson, who has become one of the film’s most ardent cheerleaders.

“We’ve known each other since 1961. So that’s 53 years,” Dern says. “He was the first person we showed [‘Nebraska’] to and he was very proud of Alexander because he did ‘About Schmidt’” — Nicholson’s 2002 film with Payne — “and he was extremely proud of me and is helping do everything that needs to be done for the movie.”

Will the two of them ever get to work together again?

“We need a story. If he’s excited by it, I’m excited that he’s excited. At one time, they talked about Jack and I doing ‘Water for Elephants’ because in the book there’s two old guys, though in the movie they only kept one old guy,” Dern says. The movie was eventually made with Robert Pattinson of “Twilight,” and the character actor Hal Holbrook in the part of the old guy.