Bruce Weber: Ready or Not

The photographer's latest book consists of photos and essays on a number of subjects, most of which he didn’t photograph. 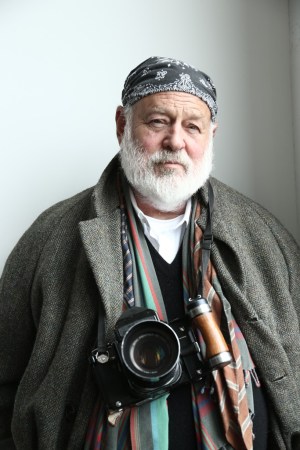 Bruce Weber, admired for his glamorous celebrity portraits and groundbreaking, controversial ad campaigns, famously started in the business as a male model. “But I wasn’t very good,” he recalls. “I was never on time.”

Only after he began studying at New York University’s Film School and working with photographers such as Richard Avedon, Diane Arbus and William Connors did he find something he could take seriously. They were mentors to him, he says.

Weber, who is notably warm and charismatic, has had a much more varied career than most photographers and has directed several films and published 23 books. His latest book “All-American Volume Thirteen: Born Ready: A Journal by Bruce Weber” (teNeues) consists of photos and essays on a number of subjects, most of which he didn’t photograph, from Homeboy Industries to Edie Windsor’s long relationship with her eventual spouse, Thea Spyer. Windsor, of course, went to the Supreme Court to challenge the Defense of Marriage law that prevented her from inheriting Spyer’s estate without paying taxes — and won.

During one of his first jobs, Weber was on location in Florida, and the client — who was producing a catalogue — insisted that he had to have a smoke bomb, that all real photographers had them. He said he didn’t have one. The man continued to insist, and even though Weber had no other clients, he went to slug him. Later, the catalogue man came back and apologized, and they had a drink. Weber says that this incident taught him to always stand up for himself.

One way that he does this is by refusing to shoot photographs digitally. Instead, he continues to use a Pentax and film. He does not want art directors and technicians going to his shoots and telling him what to do as they try to tinker with the photos. He also prefers the results that film gives him. This intransigence has cost him clients, but he doesn’t care.

Weber describes the way that the “All-American” series of books is put together. His production team, which includes his wife, photo agent Nan Bush, meet and decide what to include. He says that, of the group, he tends to be the “loosest about” the All-American label: “Oh, he’s a French photographer, but he’s been to the United States. That works.”

For this particular book, he was alerted to Homeboy Industries by meeting with Wendy Stark, whose father, the celebrated producer Ray, started the charity, which helps young men who are in gangs start on a different path and which includes a bakery, a silk-screen shop and other enterprises. “He was an amazing man, an important producer and great art collector who decided to help men and women who have just gotten out of prison,” notes Weber of Ray Stark.

When he decided to run the Windsor-Spyer piece, he was presented with a treasure trove of photos of the two beautiful women together at different points in their lives. Another chapter in the book is about Micky Wolfson, a collector of art and objects who created his own museum in Miami. “It has a great shop,” Weber says. “I love museum shops.”

One of his films, 2004’s “A Letter to True,” is about one of his beloved dogs. Weber recalls visiting Japan to promote the book without True, and seeing the city plastered with huge images of the dog, which made him miss him badly. He also remembers that, during the part of the publicity jaunt in which True traveled with him, journalists would interview the dog, asking questions and noting down his answers. At one screening, “True was surrounded by women; it was as if he was Elvis Presley.”

Weber has received a lot of criticism for the heightened sexuality of some of his advertising photography. He points out that desiring the subject of a photograph is a good, not a bad, thing. He maintains that when he photographed the nude groups that initially appeared in Calvin Klein ads, they ended up being shot that way because the clothes hadn’t arrived. The clothes eventually did turn up, and he ended up shooting the models clothed, too, but Klein preferred the nude shots.

Weber says he gives acting and dance classes to the groups of models he uses in campaigns for firms such as Abercrombie & Fitch, images that have again been criticized for their overt sexuality. But the young people often end up making enduring friendships from the shoots.

“My life doesn’t begin and end with photographing celebrities,” Weber adds. He notes that he just got back from a visit to Detroit, which he found fascinating, and says that he could easily have spent much longer there. He adds that he usually ends up photographing people at the beginning or the ends of their careers. Older artists, he says, are very professional, and “they’re so happy to be getting some attention.” Older performers and artists are more respected in Europe, he observes, and that’s why many of them move there.

Weber made his 1988 film, “Let’s Get Lost,” after spending years as a major fan of the jazz trumpeter Chet Baker. One snowy day in Manhattan, he saw a man in a convertible with the top down. It was Baker. He went to see him and told him that he was eager to photograph him and make a film about him. “He was amazing,” Weber recalls. “Because I had that camera, I was able to see him again. I think it’s more difficult for a painter who asks to make someone’s portrait, because it takes so long.”

The photographer notes that certain very handsome men are jealous of the photographic relationship he has with other good-looking men. It seems that they don’t like sharing that sort of attention with others of their kind.