Carla Bruni-Sarkozy on Music, Fashion and Life After Politics 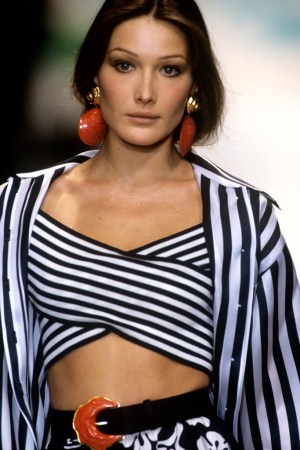 A year after being freed from the restrictions involved with her role as France’s first lady, Carla Bruni-Sarkozy has resumed singing and modeling. She recently released her fourth album, “Little French Songs,” and shot a campaign in Rome for Bulgari, with Terry Richardson on the other side of the camera.

At 45, Bruni-Sarkozy juggles between her career and motherhood: She has an 11-year-old son, Aurélien, from a previous relationship with French philosopher Raphaël Enthoven, and had a girl, Giulia, with former French President Nicolas Sarkozy in 2011.

Bruni-Sarkozy rang WWD in Paris to chat about the “fashion family,” how The Rolling Stones inspired a song (although it has nothing to do with her reported relationship with Mick Jagger) and her sibling Valeria Bruni Tedeschi, a rising director.

WWD: As a first lady, you must have faced some restrictions in your way of dressing. Are you happy to be freed of them?
Carla Bruni-Sarkozy: No, because in my daily life, I could wear whatever I wanted. However, I have less obligation to dress up because I no longer have official duties. It was only to welcome guests or to accompany my husband on state visits, but it was a pleasure. In my [everyday] life, I dress in a very simple and comfortable way. I find it elegant to dress simply.

WWD: With whom did you collaborate at that time?
C.B.S.: I worked with all the French fashion designers. It wasn’t really work. I could borrow their clothes for official occasions, it felt easy and pleasant. I have known them for 20 years. I would wear Dior, Chanel, Jean Paul Gaultier, Azzedine Alaïa, Yves Saint Laurent and other designers from the younger generation. I’m friends with a number of them.

WWD: What are you planning to wear during your tour?
C.B.S.: I have yet to pick the costumes. Perhaps I’ll work with a designer, it would be great. I’ll wear simple clothes.

WWD: Do you work with a stylist, or shop directly?
C.B.S.: I do it by myself. But when I do promotions, TV, one of my best friends, Joanna Fath, a stylist and the granddaughter of the designer [Jacques Fath], comes to my home for fittings.

WWD: How has your relationship to fashion evolved over your different lives as a model, singer, first lady, mother…?
C.B.S.: The fashion world is like a family to me. I have remained very close to former models Farida [Khelfa] and Marpessa [Hennink]. Each time I get to see the other models, whom I wasn’t so close with, it is always a pleasure. I have remained close to designers, hair stylists, makeup artists and photographers.

WWD: You are appearing in a Bulgari ad shot by Terry Richardson. How does it feel to get back to modeling? Do you have more campaigns to come?
C.B.S.: It did not feel like being a model.…It felt like shooting in a nostalgic movie as the shoot was in Rome in magic places, outside time. It was the first time I was working with Terry Richardson. For now, I’m just doing this Bulgari campaign. I am quite busy with music.

WWD: Is your tour going to take you to the U.S.?
C.B.S.: I believe it’s on the schedule, absolutely. I’m thrilled. I have never performed there. I have only done some small radio and TV appearances on promotional tours. We had two songs during a concert for Nelson Mandela’s birthday [at New York’s Radio City Music Hall in 2009], but that is different. There were many fantastic artists [including Aretha Franklin and Gloria Gaynor]. People didn’t come to listen to me.

WWD: What is your dream? Madison Square Garden?
C.B.S.: No! I don’t have this pretension. [Laughs.] I’ll perform in small music venues; even in France I perform in small venues. That also has to do with my artistic choice. I try to make an intimate connection with the audience.

WWD: You have said you aren’t a “bête de scene” (or “born for the stage”). How so?
C.B.S.: Some artists are performers; they take the stage by storm. I am not a “bête de scene.” This is a French idiom. I’m reserved, I would never dare to dance on stage. I love dancing to have fun but not for show. Maybe one day, at a certain age, I will tap dance! I am thinking of artists like James Brown or Mick Jagger who are truly bêtes de scène…

WWD: Speaking of Jagger, a song in your new album is about another Rolling Stones member, Keith Richards.
C.B.S.: Not about him, who I don’t know personally, but about a house, Villa Nellcôte, in the south of France, that belonged to Keith Richards and his wife, Anita Pallenberg. A French photographer, Dominique Tarlé, captured the incredible atmosphere during the few months the Stones spent in the house in 1971. His snapshots are magnificent, very evocative of the 1970s. It seemed that everything was possible. It was a different era for fashion, music; these were the first years of great freedom.

WWD: Are you inspired by the Seventies in fashion?
C.B.S.: Not really, but I have kept a taste for shirts and blue jeans, which became big in those days.

WWD: Your sister Valeria Bruni Tedeschi presented her film “A Castle in Italy” during the Cannes Film Festival. It is about your family. Who is starring as you? What is your relationship to your sister? Do you have any plans to work together?
C.B.S.: It a marvelous movie, very poetic. She has reached such an art. It is not really autobiographical. My sister, who is very strong, is not like her character in the movie. The character who would be me doesn’t exist in the movie. I am very close to my two sisters, Valeria and Consuelo. Valeria wanted me to star, but I don’t feel like it at all. Maybe we could do something together around music.

WWD: Woody Allen [who cast Bruni in a bit part in 2011’s “Midnight in Paris”] will shoot his next film in the south of France. Has he reached out to you?
C.B.S.: He hasn’t. I wish! [Laughs.] It was great shooting with him, but I am not an actress. Woody Allen is so talented. I don’t see a future for me in the movies. It was more of an experience.

WWD: Any part for you in the Yves Saint Laurent biopics that are in the pipeline?
C.B.S.: I had a very small importance in Yves Saint Laurent’s life. I played a part as one of his very numerous models. I worked with him very early in my career until the end. He was someone I loved. Over there, Avenue Marceau, there was a sense of the past. There was something pure. This house was mysterious and captivating, incredibly endearing.