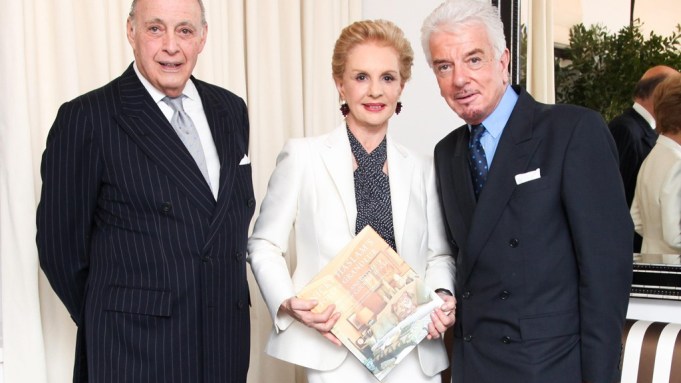 “It’s the closest you can get [to a country garden] in a New York office,” Herrera smiled, between welcoming guests that included Calvin Klein, Oscar and Annette de la Renta, Prabal Gurung, Lauren Remington Platt, Jennifer Creel, Graydon and Anna Carter, Aileen Mehle, Yanna Avis, John and Joyce Varvatos and Taki Theodoracopulos, who talked excitedly about his cameo in the upcoming Alec Baldwin film “Seduced and Abandoned.” The documentary will premiere at the Cannes Film Festival, where it was filmed last year. “I’ve been to Cannes many times but never walked the red carpet before,” Theodoracopulos said, smiling.

Haslam spent the evening with a purple Sharpie in hand signing copies of the book.

“I’ve known [Herrera’s husband] Reinaldo really since the Sixties. When he was a young slip of a thing, we both were. Then he met the divine Carolina…And she’s one of the sweetest women that I have ever known,” he said of his hosts.

He paused when asked to give his professional appraisal of the showroom’s new look.

“Triple A, isn’t it? Triple A and triple sec because the cocktails are absolutely…” he laughed, clinking his glass.

The 73-year-old Haslam, whose clients have included Ringo Starr and Mick Jagger, will get in on the rock act later this summer when he releases an album — his first — which features contributions from Bob Geldof, Helena Bonham Carter and Bryan Ferry. He showed off the portrait he commissioned from David Downton for the cover on his iPhone: “Couldn’t resist making it my wallpaper.”

WWD noticed he wasn’t wearing his glasses in the image.

“They’re already fake,” he laughed, taking them off. “Topman. I just think I look intellectual or like Cary Grant. One or the other.”