This year, Greenwood will be receiving a Lifetime Achievement Award — and she is, indeed, nominated once again. 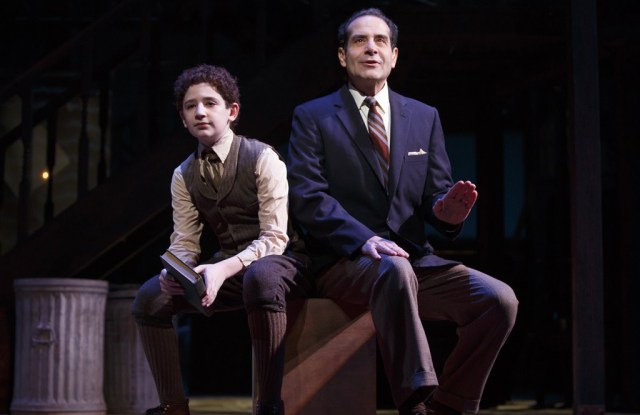 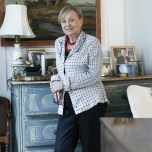 In “Act One,” the dramatic version of playwright Moss Hart’s autobiography, now playing at Lincoln Center and starring Tony Shalhoub, Santino Fontana, Matthew Schechter and Andrea Martin, Hart is initiated into the wonders of Broadway shows by his eccentric Aunt Kate — played by Martin — a passionate theatergoer.

The costumer for the play, Jane Greenwood, who is originally from England, was also taken to the theater by an enthusiastic aunt. In her case, the aunt had been in the Women’s Auxiliary Air Force. And the theater made everything come alive for her, too. “I loved going to the theater, looking at the clothes and dressing up my dolls,” she says.

There’s only one fly in the ointment. Greenwood is the Susan Lucci of costumers. She has been nominated 18 times for a Tony for her costumes, but has never won one.

This year, she will be receiving a Lifetime Achievement Award. But she’d still rather have the standard statuette — and she is, indeed, nominated once again, this time for “Act One.” She’s not comfortable with the idea of a Lifetime Achievement Award, either, since, at 80, she’s still working, has no plans to quit and feels that she has plenty of great projects ahead of her.

Greenwood lives in New York’s Chelsea in a beautiful brownstone she and her late producer-designer husband, Ben Edwards, bought in the early Sixties, when it was a rooming house, and gradually transformed into a one-family dwelling complete with offices for each of them. Still slim, stylish and pretty, she looks and seems decades younger than she is. She went to art school in London, then went to work in Stratford, Ontario. Her first job in New York was at a costume shop, cutting out the designs.

Greenwood’s first costume job in New York was on “The Ballad of the Sad Café” in 1963, a groundbreaking show for its study of the grotesque. Another early production was the Richard Burton version of “Hamlet” on Broadway. She has since done more than 100 Broadway plays, among them “A Delicate Balance,” “The Prime of Miss Jean Brodie” and “A View From the Bridge.”

She met her husband on a job, and she used to joke that she married him so that she could get more work. In fact, they did often work together — something that suited both of them quite well. They had two daughters, Sarah and Katherine, and there was pressure from friends and family to move to the suburbs, which they refused to do. “Living here, I could often go home for lunch if I wanted to or needed to,” she says. Sarah is a costume designer whose credits include “The Devil’s Advocate” and “The Secret Life of Walter Mitty.” Kate is a wardrobe supervisor. Edwards, older than Greenwood, died at 82 in 1999.

Costume design is a very small world, and Greenwood knew Alvin Colt, the legendary costumer of “On the Town” and “Guys and Dolls,” well. He and Edwards often worked on productions together in the Fifties.

She also knows Jenny Tiramani, the costumer of the recent hit productions of “Twelfth Night” and “Richard III,” and she knew Janet Arnold, the expert on period costuming who provided the archives Tiramani has used to found a school in London, The School of Historical Dress. They attended different London art schools at the same time and stayed in the same hostel. “She was responsible for the look of all those clothes at the Globe [Theatre],” Greenwood notes.

“It was a very rich period,” Greenwood says of the pre-Depression era of “Act One.” She found some vintage clothes and had certain things made, such as Hart’s suit, but she had to make sure that they weren’t too stylish and didn’t make him look wealthy, but instead like what he was — a poor boy striving to make a good impression. So the pieces couldn’t fit perfectly and also couldn’t match perfectly.

“There weren’t many mass-produced clothes in those days,” she says. “It was a bit of a catch-22. But we tried to keep as many real pieces as we could.” They also combed costume-shop inventory all over the country to find items that would work. Cast members, Martin among them, often play more than one character and otherwise have many costume changes, so there has to be a large cast of helpers backstage. “It is quite a chaotic backstage scene,” she says.

Her next production will be William Shakespeare’s “Much Ado About Nothing” with Brian Stokes Mitchell, which will open June 3 at the Delacorte Theater in Central Park. She’s still hoping to get that standard Tony. “I’m waiting for the second act,” she says of her life.