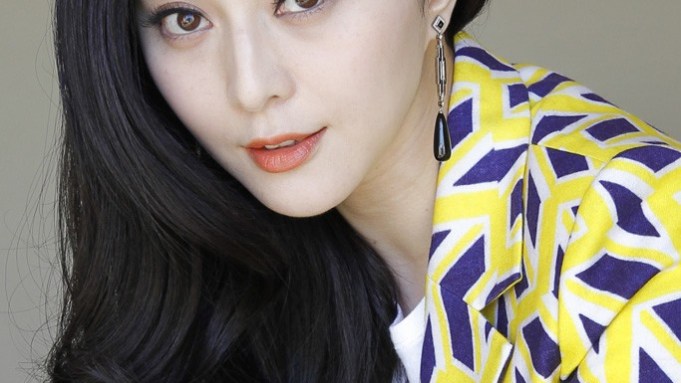 Fan Bingbing — one of China’s biggest sex symbols and fashion icons, spokeswoman for Louis Vuitton and L’Oréal, and an unparalleled box office draw in the world’s most populous country with nearly 40 movie credits to her name and more in television — is talking craft services. The difference between American and Chinese movie productions is, she says with a laugh, a “long table with food.”

The actress is discussing the on-set amenities of her first American movie role, a small part in the third installment of Marvel’s massive “Iron Man” franchise due out in May. Despite frigid weather during its two-week shoot in China, she says, “Everyone was in a good mood.” Chinese filmmaking, on the other hand, doesn’t have quite as adequate rations and is “not really comfortable.”

It’s the Monday after the Oscars, and while the rest of Los Angeles is sleeping off awards season hangovers, Fan is at the Four Seasons Hotel in Beverly Hills discussing what could be a turning point for her. The 31-year-old is facing a critical career moment, as “Iron Man 3” and “The Moon and the Sun,” a historical fantasy film set for release next year, will be important tests of her international crossover potential. Still, she hasn’t lost her lightheartedness.

“Just go with it” is the closest she offers to a Hollywood-conquering maxim.

The two-minute video of Fan’s film repertoire provided by her publicist shows that Chinese acting roles have required the actress to cry, sing, shoot, fight, suffer, scheme and perfect dramatic expressions. The sizzle reel belies her in-person affect: funny, blunt and easygoing. Her playfulness extends to her off-duty attire. She pairs a yellow and blue blazer with black jeans and a T-shirt. On another person, the bright jacket could be overwhelming, but Fan’s long hair, long lashes, untamed brows, pale skin and orange lips — she won’t be seen without lipstick and confesses she’s obsessed with proper skin care (“Because I’m a professional actress,” she exclaims when asked why she’s so fanatical) — aren’t easily overpowered.

Fan may be funny, but a Chinese actress wading into Hollywood is serious business these days. About a year ago, she signed with William Morris Endeavor to strategize how best to break into American movies. Jackie Chan is the only other Chinese actor the agency represents. Last month, when not on red carpets — she walked them at the Oscars, Elton John’s Oscar viewing party and the Vanity Fair party — she filled her two-and-half days in Los Angeles making the rounds at studios, for which a bankable Chinese star is increasingly seen as a brass ring thanks to the industry’s ever-expanding dependence on foreign audiences and global blockbusters. Fan, who said she’s been reviewing oodles of scripts, senses she’s on the cusp of a transformation from a national to global force.

“I’m becoming a focus,” she says. “I’m still a Chinese actress, but with more international exposure.”

Fan’s fashion choices have already upped her exposure markedly. She’s known for taking risks and wearing striking, colorful creations, such as the Atelier Versace and Christopher Bu dresses she wore to the Cannes Film Festival in 2011 and 2012. She followed that course on the awards season circuit in Los Angeles, sporting a peach Elie Saab Couture gown to John’s party, a black-and-white Oscar de la Renta to Vanity Fair’s after-ceremony bash and a pink Marchesa creation on the Oscars red carpet proper.

“That [Marchesa] dress is a beautiful color. It’s my favorite color,” she says.

Less than 24 hours after her Oscars appearance, Fan had already checked out what was being said about the Marchesa gown on Weibo, the Chinese social media network. She relayed that her fans were pleased, while noting that reviews of her outfits don’t mean that much to her.

“I don’t care. Why care? I’m happy,” she says. “I have to say that I’m a brave girl. I like to be challenged. I like playing with fashion.”

Fan’s relationship with fashion began at an early age in her home city of Yantai, in China’s Shandong province. When she was growing up, her mother owned a boutique. “That influenced me a lot,” she says. “She always chose me as her model. I was very a young model then and everything on me was a good sell. So, my mom always put the ugliest things on me. My mom is so smart.”

Brands including Louis Vuitton, L’Oréal, Adidas, Nokia and Mercedes-Benz have taken notice. She’s fronted campaigns for them all.

“If I could, I would wear Louis Vuitton every day,” she says.

But Fan isn’t content with staying in front of the lens. In movies she went from acting to producing. “A tip for girls, don’t be a producer or you will grow older faster,” she quipped about the experience. And in fashion she’s planning to go from spokeswoman to creator, with her own brand of accessories and clothing that could launch as early as next year. Her plans for the line are “something daily and casual — pretty, but not that extravagant.”

Becoming a globally recognized actress could help move some bags. Fan thinks a plum Hollywood action role could be a path to take to win over a broad base of moviegoers (she points to Anne Hathaway’s turn as Catwoman in “The Dark Night Rises” as an ideal example) while acknowledging that her looks will help with translation.

“I have power,” she says. “I’m not only the ‘pretty girl’ to Chinese audiences.”