The winners of the annual Chopard Trophy for up-and-coming talent chat about the honor, and their next projects, with WWD. 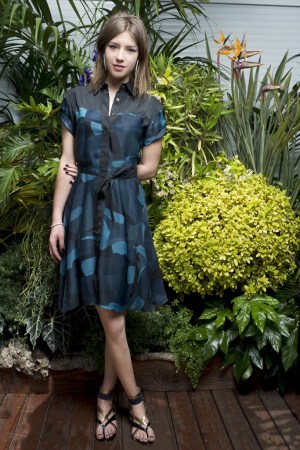 One is known for an indie movie featuring graphic scenes of lesbian sex; the other rose to fame in a big studio fantasy-adventure franchise.

Adèle Exarchopoulos and Logan Lerman have taken wildly different roads to success, yet both have caught the eye of Chopard, which has chosen them as the winners of its annual Chopard Trophy for up-and-coming talent at the Cannes Film Festival.

For Exarchopoulos, it marks a return to the place that propelled her into the international spotlight last year, when the 20-year-old actress shared the Palme d’Or — the festival’s top prize — with director Abdellatif Kechiche and costar Léa Seydoux for the coming-of-age drama “Blue Is the Warmest Color.”

“It’s fun to return to the scene of the crime,” says Exarchopoulos in the Chopard Lounge on the rooftop of the Hôtel Martinez in Cannes, France. The day before she walked the red carpet in a made-to-measure Louis Vuitton gown. “I’m realizing it will never be like last year, but it’s something new.”

Twelve months on, she’s ready for Hollywood. Sean Penn has asked her to join the cast of his next feature, “The Last Face,” shooting in South Africa this summer, and it was revealed this week that Exarchopoulos would star opposite Idris Elba in the thriller “Bastille Day.”

She is feeling a little apprehensive about shooting in English.

“I get the feeling that when you speak another language, you’re not the same person — you can’t improvise the same, you don’t have the same comeback, the same flow,” she muses. “I don’t feel completely at ease in English. In fact, I don’t feel altogether myself, so sometimes it’s frustrating. But you have to learn.”

Exarchopoulos is keeping a foot in the indie world — she stars in French director Marianne Tardieu’s “Insecure,” which is screening for distributors in Cannes. Lerman is also switching gears — though in the opposite direction.

Best known for playing Percy Jackson, the teen who finds out he is a superpowered demigod, Lerman has tackled edgier roles, like Charlie in the 2012 film adaptation of cult novel “The Perks of Being a Wallflower.” Come November, he will hit screens opposite Brad Pitt and Shia LaBeouf in World War II drama “Fury.”

“It wasn’t an easy film to make. War is hell, and we definitely went to hell to make the movie,” Lerman says. Training involved getting up each morning at 5 a.m. and fighting the other cast members. “They’d break us down the same way that the army would a soldier.”

The experience has left a mark.

“I’ve kind of just chosen to take time off instead of giving myself to projects I’m not 100 percent passionate about,” Lerman explains. “‘Fury’ was one of the most emotionally and physically exhausting films I’ve ever been a part of — also one of the most creatively satisfying. So I’m just waiting for something that I’m excited about.”

The 22-year-old is now looking for material to produce himself after getting some advice from Pitt.

“He’s definitely lent a hand in terms of helping me. He’s someone I really, really admire and appreciate,” Lerman says. “I’m very proud of our friendship. It’s nice to have someone like that that can guide you and mentor you.”