The Italian ambassador and his wife, Laura Denise, are celebrating Italian culture in America this year. 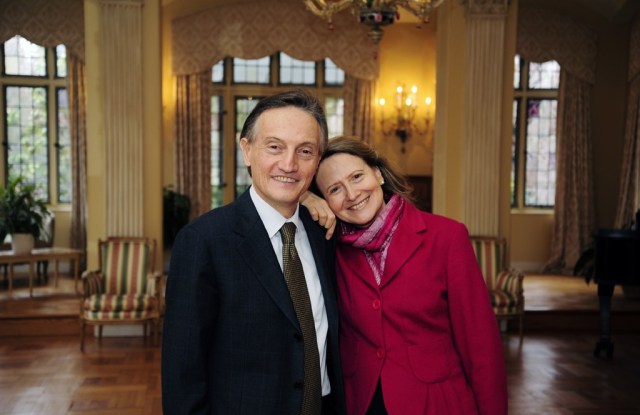 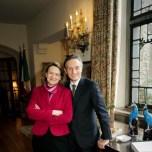 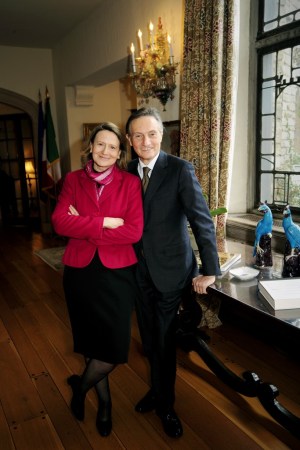 WASHINGTON — Italian history defines the art of flaunting high culture to win commercial success — from ancient Rome to Marco Polo to Cosimo de’ Medici, who hired Michelangelo to help build support for his city-state. But these days, with Italy’s government in a state of constant crisis, feting Italian design can test even the savviest Roman’s devotion to “la bella figura.’’

That’s the challenge facing Ambassador Claudio Bisogniero and his wife, Laura Denise, who this year are celebrating Italian culture in America.

“Washington is a special city,’’ says Bisogniero, who operates around the clock to woo friends in high places. “If an ambassador comes here and thinks he can do his work in the old traditional way, to stay in his office and send diplomatic notes and wait for an answer, I don’t think he has a chance. That isn’t how this city works. You need to go out to meet people in think tanks, opinion makers. It is so important to be active, present and visible on the D.C. scene.”

He’s certainly that. One of Bisogniero’s newest gambits is the Twitter account he opened in March. So far this year with 2,700 tweets, he’s lined up close to 2,300 followers — almost 50 percent more than British Ambassador Sir Peter Westmacott.

While Westmacott finesses the benefits of a common language, multiple defense alliances and an able crew of high-profile royal visitors, Bisogniero deploys his own advantages, including a palatial city residence, a politically active Italian-American community and a committed and entertaining wife.

As comfortable pouring tea for two as hosting a dinner for 500, Laura Denise packs the stamina and charm needed to make every guest feel special. “The diplomatic life is all about creativity,” says Laura Denise, whose favorite designers include Renato Balestra, Giorgio Armani and Beatrice di Borbone. “You have the chance to create rooms, tables, beautiful events. But if you take off all the trimmings, what matters most is meeting people.”

At an embassy event celebrating Elle magazine and Gucci last March, the couple welcomed Vice President Joseph Biden’s wife Jill, along with White House deputy chief of staff Alyssa Mastromonaco and New York Sen. Kirsten Gillibrand. Two weeks later, Biden was back for the Opera Ball, this time accompanied by her husband, who delighted the crowd by reminiscing about his wife’s Italian-American father.

With friends and events like these, what could the Bisognieros possibly have to worry about?

Lots. In between those two high-profile parties, Italy’s foreign minister, Giulio Terzi di Sant’Agata, Bisogniero’s boss and embassy predecessor (Terzi took the embassy’s chief of staff with him when he returned to Rome), resigned unexpectedly in March.

As Italian ambassador to Washington from 2009 to 2011, Terzi is credited with initiating the year of Italian culture in America. In December, he made a special trip to Washington as foreign minister to launch the program with a reception at the National Gallery of Art to celebrate a three-month exhibition of Michelangelo’s marble masterpiece “David-Apollo.”

Three months later, Terzi exited in a blaze of recriminations. His resignation, he said, was a protest against then-Prime Minister Mario Monti’s refusal to extradite two Italian sailors accused of murder in India. That charge prompted the beleaguered technocrat famously to declare to parliamentary investigators looking into the Indian affair, “This government can’t wait to be relieved of its duty.” (Monti still had to wait a month for Enrico Letta to succeed him in April.)

Asked at the Opera Ball if he had taken a moment to telephone Terzi to see how his predecessor was surviving, Bisogniero replied he’d been too busy. And who can blame him? Italy under Letta is struggling to hold together a centrist government despite pulls from media magnate Silvio Berlusconi (recently found guilty of having sex with an underage prostitute) on the right and crusading comedian Giuseppe “Beppe” Grillo on the left. No wonder the ambassador prefers to stick to a more upbeat script.

Bisogniero won’t discuss the success of Grillo’s Five Star movement, but is happy to tout the strength of Italian President Giorgio Napolitano, 89, known affectionately as “King Giorgio.” “He is fantastic,” says the ambassador, who turns 59 this month. “Universally respected both domestically and internationally, he has led the country through difficult times.”

So while Italy battles a tough economy and political confusion, the ambassador’s main goal is to end this year with a portfolio long on leads for future business and artistic collaborations for Italian companies and organizations.

Last month, Bisogniero zipped off on one of several overnight trips to President Obama’s hometown. “Chicago and Milan are sister cities,” he explains, later tweeting about attending opening night of four days of Verdi concerts by Ricardo Muti and the Chicago Symphony. While in Chicago, he also revisited discussions with an Italian-American doctor and medical robotics expert he met earlier this year about ways to collaborate with Italian researchers.

Italy’s commitment to focusing diplomatic missions on business and cultural exchange programs began in Tokyo in 2001, with Beijing in 2006 and Russia in 2010. “We Italians always have had strong relations with China from the time of Marco Polo and Jesuit missionary Matteo Ricci,” says Bisogniero, looking dapper in a Davide Cenci suit. “And now investments are growing there in exports of fashion, luxury goods, cars and industrial goods.”

The year of Italian culture in America marks the first time Italian companies have bankrolled the project. “Given the financial crisis in Europe, we could not look to government for funding,” says Bisogniero. Contributors include Fiat; S. Pellegrino; Gruppo Campari; chocolatier Ferrero; lottery and online gaming giant Sisal; Sicilian vintner Donnafugata; multinational oil and gas company ENI; firearms maker Beretta, and Intesa Sanpaolo, the Turin-based banking group that owns up to 33 percent of Alitalia airlines.

In between traveling the U.S. to celebrate Italy, the Bisognieros make the most of cultural opportunities in the nation’s capital. The ambassador studies piano with a teacher from the Levine School, but his real passion is flying, especially with his friend and fellow pilot John Mason, the former chairman and chief executive officer of the National Savings and Trust Co. (now SunTrust Bank).

Laura Denise, who dislikes flying, prefers staying closer to Villa Firenze, the 22-acre estate that is the Italian ambassador’s D.C. home and which is near the official residences of Israel and Kuwait. She has decorated the house with antiques from her Olivieri family, which dates to the 12th century. Her grandmother’s house where she was born in Mache is near the papal city of Fabriano, where the Renaissance master Raphael got his drawing paper.

An avid reader of English literature, Bisogniero during university spent a summer abroad studying the subject in Dublin. She relaxes reading Charles Dickens and Elizabeth Gaskell, along with modern Italian writer Dino Buzzati.

“You read about what moves people, and it’s all there. In books you can really learn about people. Because writers base their characters on the lives of people they know, reading books is like living 200 more lives,” she says. “Love, envy, searching for peace, it’s all there. We face it every day of life, and like the characters, we must choose what is right.”