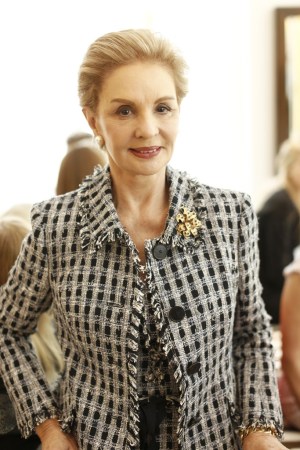 NEW YORK — September might seem eons away on the fashion calendar, but the Couture Council of The Museum at FIT got a jump on its annual fall luncheon by hosting a warm-up one Monday for this year’s honoree, Carolina Herrera.

While guests like Yaz Hernandez, Alexandra Kotur, FIT’s Joyce Brown and Valerie Steele, and this year’s cochairs Julie Macklowe and Elizabeth Musmanno wound their way through the designer’s Madison Avenue boutique for an air-kiss or two, models passed by in looks from Herrera’s archives collection. Once seated, they viewed a sampling of designs from Herrera’s archive, spring, pre-fall and fall collections. During lunch, the modeling stopped any thank-goodness-winter-is-over conversations cold and prompted such exclamations as, “Is that one going to the Met ball?” Another guest said of an all-gray, fur-lined ensemble, “I’ll take one of those in aisle two. That’s in my color wheel — even if it wasn’t, I’d still take it.”

At one point, Herrera, who will receive the 2014 Couture Council Award for Artistry of Fashion on Sept. 3, tried to cool all the attention. While the council’s chairwoman Hernandez spoke of the upcoming “lovefest for Carolina” and raved about the designer being “a megastar” for Latinas, the designer jokingly fanned herself, which only lead to another compliment. “Of course, everybody knows she’s a fabulous designer. But does everybody know that she is so witty and funny, and a really good friend? As my Venezuelan husband would say, ‘She embodies the best of Venezuela,’” Hernandez said.

Steele seemed to agree, noting the expected 600-plus crowd will call for extra tables at the David H. Koch Theater event. With the official tribute still months away, Herrera said she is not quite ready for that occasion. “I am ready for resort, and the Met ball. And I’m leaving for a wedding in London Wednesday, but I’m coming back on Sunday. It’s Taki Theodoracopulos’ daughter [Mandolyna]. Reinaldo is there and the girls are coming. They are like family.”