The Australian is the most decorated Ironman triathlete of his generation. 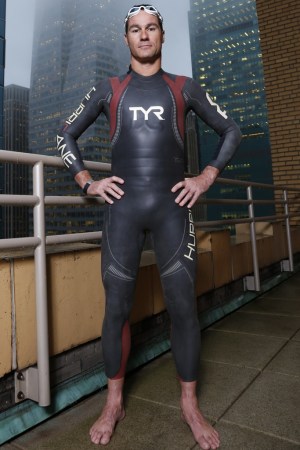 Craig Alexander is so good at rolling with the punches that he could be a prize fighter.

When he found out that a murder had been committed outside the SBR triathlon store where he was supposed to do a book signing in New York City earlier this month, the champion triathlete just went to plan B, penning his name inside a couple of hundred books for the store to sell at a later date.

That flexibility and ability to adjust is just one reason Alexander has reached the pinnacle of his sport over the past 18 years. That, coupled with a rigorous and relentless training schedule — and a boatload of God-given talent.

The Australian, who also keeps a home in Boulder, Colo., is the most decorated Ironman triathlete of his generation with three wins at the World Championships in Kona, Hawaii, including two consecutive years in 2008 and 2009. Although he had a tough time this past October, coming in 12th, he had a good year overall, finishing second at the Ironman 70.3 World Championships in Las Vegas and first at the Eagleman half-Ironman shortly after smashing the Ironman record with a time of 7:57 at the Asia-Pacific championships in Melbourne, Australia, in March.

While his accomplishments in triathlon are too numerous to count, for Alexander, nicknamed “Crowie,” it’s all about his family. He and his wife, Nerida, have two children: Lucy and Austin, with a third on the way. The baby is due in March, just around the time he plans on jumping in the water to defend his title in Melbourne.

“With the way my wife spends money, I’ll be racing until there’s no cartilage left,” he said with a straight face.

Even so, he’ll turn 40 this summer — “Thanks for pointing that out,” he said with typical Australian dry wit — but Alexander believes there are a few more miles left in his legs. “As long as it doesn’t negatively impact my family, I’m committed to one more year,” he said. “Age is irrelevant. This sport has kept me young and I feel a lot of pressure and responsibility to the people who sacrifice for me. I still feel like I did 10 years ago. And I believe you can still be competitive in your 30s and 40s. I don’t think age is a barrier. And I was a late starter; I didn’t do my first triathlon until I was in my 20s.”

He plans to kick off the season with the Melbourne race again in 2013. “It’s near my home, it’s a major race; a regional championship and I won last year, so that’ll be my first race,” he said. “Then, I’ll definitely be in Las Vegas, and Kona is on my radar,” he said. “I’m not interested in second-tier races.”

And he’s still having fun. On a foggy, misty day in New York City, he thought nothing of jumping into a wet suit for a photo during an interview at the Tyr offices in Manhattan.

And although his U.S. book tour involves visiting 11 cities in 12 days, he’s enjoying meeting his fans. “It requires a different kind of endurance,” he said.

The book, a coffee-table tome entitled “As the Crow Flies: My Journey to Ironman World Champion,” chronicles a year in the life of the athlete through a black-and-white photo essay by Paul K. Robbins.

“The idea was floated in January of last year and originally it was supposed to be more of a biography style,” he said. “But that didn’t appeal to me. It seemed narcissistic and a lot of work.” So he opted instead for the photographic journey. Robbins, who is also a triathlete and surfer, followed Alexander around for 12 months taking behind-the-scenes images of his life — everything from bike training rides and doctor’s visits to life at home and visits to his sponsors. “I’m a sports fan and like the inside-the-locker-room stuff,” he said. “And I was selfish, I wanted to include family photos and also give back to my sponsors.”

He said all the images are “authentic. There were no double takes. I wasn’t going to ride up and down the same road for a shot. He just set up his camera and captured the shot when I went by.”

Alexander’s book follows one by Chrissie Wellington, the female Ironman World Champion triathlete who recently wrote her autobiography. Although the initial plan was for her to take a year off and then return to racing, Wellington recently announced that she was retiring from triathlon. “The sport is going to be lesser off without her,” he said. “I wish her the best of luck, but she has other goals above and beyond triathlon.”

Alexander will start gearing up for 2013 when the book tour is over. As a three-time World Champion, he knows he’s got a target on his back whenever he races, but he tries not to get caught up in the drama.

“As defending champ, I know I’m on everybody’s radar,” he said. And although he admits that he does look at his competition, “I can’t control them underperforming. It’s just up to me to get in the best shape I can. I have the utmost respect for the other guys I race against, but I have to self focus and try to concentrate on my own training.”