The exhibit will open to the public Friday. 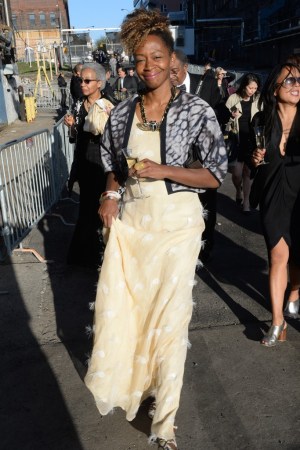 Inside an old sugar factory on the fringes of Williamsburg, Brooklyn, a tiny figure in red circled a sculpture several stories high that looked to be as big as a jetliner in an airport hangar.

Solange Knowles, in a red jumpsuit, was looking up in awe trying to grasp the size of the thing. This was an understandable reaction.

The sculpture was a sexually provocative feat of construction and whimsy created by the acclaimed artist Kara Walker to be in the shape of a sphinx, a very regal and simultaneously voluptuous sphinx with its breasts exposed. The piece was made out of polystyrene and coated in white sugar, a striking contradiction because Walker gave the sphinx the features of an archetypal black woman who served white families in the segregated South — a mammy complete with a kerchief wrapped around its head.

“It’s striking,” Knowles said. “And beautiful. The juxtaposition within the material and the actual statement itself is incredible. Obviously it’s a beautiful venue and a fabulous night, but I hope everyone’s had a really good opportunity to be moved by it.”

Walker was being honored Tuesday night by the public arts organization Creative Time, which commissioned her to do an installation for the occasion that included the sugar colossus as well as a group of smaller sculptures in the shape of young boys cast in molasses. The exhibit will open to the public Friday. Walker’s often-provocative work, the subject of a Whitney retrospective in 2007, deals with America’s troubled racial past and this particular installation sought to make a connection between slavery and the sugar trade. Its subtitle is a mouthful: “The Marvelous Sugar Baby, an Homage to the unpaid and overworked Artisans who have refined our Sweet tastes from the cane fields to the Kitchens of the New World.”

Knowles described herself as a longtime fan of Walker’s. She was not alone. Turning up to the old Domino Sugar Refinery in Brooklyn to honor the artist were Chloë Sevigny, Kim Walker, Jenna Lyons, Dao-Yi Chow and Maxwell Osborne, Dustin Yellin, Waris Ahluwalia, artists Cindy Sherman and Chuck Close, as well as collectors like Agnes Gund, Beth DeWoody and David Rockefeller. “She’s been such a pioneer as an artist in being a voice in the conversation about how race relates to society, and that’s so necessary as an artist,” Knowles said.

Though she is mainly known as a pop singer, lately Knowles has been reaching for the kind of depth in her music that she respects in the work of the 44-year-old honored artist.

“I’ve been recording my record on a sugar plantation in Louisiana and I’ve been studying the birth of the entire sugar industry within how it relates to race and slavery,” she said. “I’m having a pretty interesting reaction right now going on because I’ve been in that space for so long and I’ve learned so much about the origin and the pain and the struggle.”

Knowles made sure to set time aside for Walker’s gala despite a lot of late-night lulus with big sister Beyoncé following the Met ball.

“I decided to be really easy with what I wore today. I’m wearing red shoes and keeping it really comfortable. That’s the only way I was going to be able to get through last night and transition into today,” she said.