A chat with the British singer-songwriter, whose debut album, “Sweet Disarray” drops in the U.S. today. 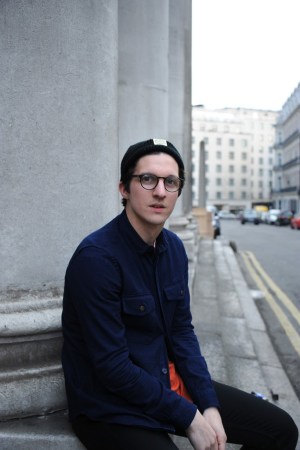 In a world of young, manufactured trying-too-hard pop singers, there’s something refreshing about a clean-cut, unassuming singer-songwriter in specs that recall Buddy Holly.

As a teen, Dan Croll, 23, thought he might have a career in rugby. But a broken leg on the field at 17 ended his sporting aspirations. “I’ve always been musical and played a couple of instruments,” says Croll, “then I decided I wanted to have a go at music.”

At 18, Croll left his home in Staffordshire, England, to attend the Liverpool Institute for Performing Arts. In 2011, his final year there, he won the Musicians Benevolent Fund Songwriter of the Year Award, which included a 5,000 pound, or about $9,000, prize. He used the money wisely. “I ended up making a basic home studio to start recording my own music in my own time.” But like most university boys, he admits, “A little bit of it might have gone down at the pub.”

The day after collecting his award, he met with Sir Paul McCartney for a 45-minute one-on-one session, a privilege granted to seven students a year, since McCartney is one of the cofounders of LIPA (there is, after all, no more famous Liverpudlian band than The Beatles). Croll played two of his songs for McCartney, one of which, “Home,” ended up on his debut album, “Sweet Disarray” (Capital Records), which drops in the U.S. today.

Asked about the experience of jamming with the former Beatle, Croll says, “It flew by so quickly.” McCartney quickly learned Croll’s songs and sang along and harmonized. “If I could have popped up a microphone and recorded him singing, that would have been great.” Although the visit was short, McCartney made an impression. “He’s just incredibly down to earth and humble, a very grounded man. I took away from it that it’s always great to be open to people and listen to their music; they might influence you further.”

Croll describes his music as folk-pop and credits his mother as one of his inspirations. “At an early age, my mum played a lot of Ella Fitzgerald, Billie Holiday and jazz music. Also, American songwriters — James Taylor, Joni Mitchell, The Beach Boys and Simon & Garfunkel,” he remembers. In his teenage angst years, he got into American pop-punk bands like Blink-182 and Sum 41. As for how he arrived at his current sound, Croll explains, “In the last five years I’ve listened to a lot of new music and electronic music. I think it’s kind of a mixture of the new, but there’s a lot of influences from all over the world. I love African music, hip-hop and R&B, so it all kind of melted to the music.”

In conjunction with the U.S. album release, he’ll be touring the States, kicking off in Los Angeles on Friday and stopping by Manhattan’s Bowery Ballroom April 17. Although Croll wrote and recorded the album solo, he tours with a band. “They’re good chaps, very talented musicians,” he says. “We’ve all been mates for the past six or seven years. They come everywhere with me for live stuff.”

Along with having the support of his friends, he’s found support within the fashion community. “We did a little album release party at Paul Smith’s store [in London], which was really nice and hopefully there’s going to be a few more of those across the stores, hopefully worldwide,” he says. “Through connections I managed to meet Paul Smith and he’s been very supportive of my music. I’ve got to hang out with him a lot, he’s such an inspirational man.”

Burberry also has supported Croll’s career, featuring him in a Burberry Acoustic session video performing “Home.” Asos.com had him in a video of a live acoustic set as well. “It’s important to get my music through that kind of world because it is quite important to me,” he says. “Fashion’s always been something I’ve grown up with; my sister studied fashion and she’s in the industry.”

Croll describes his fashion style as “quite simple really.”

“I don’t want to say plain because that sounds boring, but there’s not a great deal of pattern use,” he adds. His glasses have become part of his look. “Up until a week ago, I’ve had one pair of glasses ever. This pair I’ve been wearing for the past four years are Paul Smith and then he just gave me a [new] pair,” he says proudly. “For the first time in my life, I own a spare.”