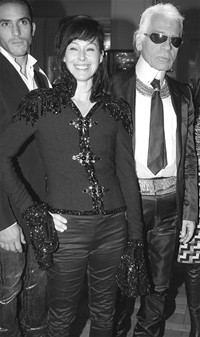 Anyone having a hard time getting around town can blame Karl Lagerfeld, who held up traffic while photographing a story for Allure Tuesday afternoon. “The paparazzi were everywhere,” he admitted. Later, as he entered Bergdorf Goodman to join Linda Wells and Ron Frasch in celebrating Odile Gilbert’s new book, “Her Style,” gawkers on Fifth Avenue created minor delays. Inside, the store was packed with Gilbert’s admirers.

“We asked, ‘Is there anyone we should be careful about inviting?’” said Wells. “But everyone likes Odile. That’s so rare in this world.”

Meanwhile, without disturbance, Celerie Kemble and Zani Gugelman made their way to the Holland & Holland store for a fete to benefit Lenox Hill Neighborhood House. The dinner following at “21,” however, seemed in jeopardy. “There’s a picket line outside the restaurant,” said Mark Gilbertson, handling a flyer that outlined the workers’ push for health insurance.

No such obstacles faced Anh Duong, Marjorie Gubelmann Raein, artist E.V. Day, Jeff Klein and Fé Fendi, who attended a party for the New Museum at the Maritime — though guests besides Cari Modine had a hard time squeezing past crowds to the dance floor. Anne Caruso, Cecilia Dean and Coco Brandolini and Fendi president Francois Kress watched from the balcony above. With a move to a new apartment and her new baby, Cuatro, Yvonne Force may not have had enough energy to break out her dance moves. But she hoped all her exertions wouldn’t stop her from attending the Dia benefit this evening. “It’s a little overambitious,” she admitted.