"Young Ones," "The Skeleton Twins," "Wish I Was Here," and "Life After Beth" were among the films to premiere on Saturday.

By Marcy Medina and Rachel Brown on January 20, 2014
View Slideshow 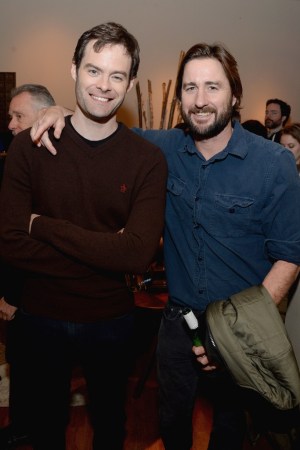 Shortly before “Young Ones” premiered at the Sundance Film Festival Saturday evening, Jake Paltrow, the director, and his cast and crew, including Elle Fanning and Nicholas Hoult, sat down for a three-course meal at The Snowlodge on Main Street in Park City, Utah. The setting was far removed from the movie’s difficult subject matter — a water crisis in the future that tests the survival of its characters — and shoot. “We filmed in a tiny place, Springbok, South Africa, and it was so hot. It was 115 degrees a couple of days,” Fanning said. “Our film is about not having water and then the real town ran out of water when we were filming there.”

Paltrow described his film as an environmental allegory, drawing parallels between its plot and California’s ongoing drought crisis.

This story first appeared in the January 22, 2014 issue of WWD. Subscribe Today.

“We are not too far away from something similar to the problem in the movie,” he warned.

The premiere was one of several taking place during a very crowded Park City evening, but Paltrow’s name on the credits guaranteed the attendance of some big-shots — his godfather just happens to be Steven Spielberg, who made his second trip to Sundance to catch the film.

At the Grey Goose Blue Door, also on Main Street, Luke Wilson, Mark Duplass sipped cocktails — Grey Goose, of course — at a fete for their film “The Skeleton Twins,” a movie that director Craig Johnson said would introduce audiences to new sides of Hader and Kristen Wiig, who play estranged fraternal twins.

“They are very funny in it, but they are also emotional and heartbreaking and dramatic and sensitive. I think people will be really pleasantly surprised by the way they interact,” he said. Duplass, who produced the film, sympathized with the characters’ sibling dynamic because of his own relationship with his filmmaker/actor brother, Jay.

“We are brothers, and we are work partners, and that can be tough to navigate. It leads to a lot of great laughs and a lot of tears and a lot of big feelings,” he said. “That is part of what drew me to this project.”

Later that night, Zach Braff hosted a dinner at the same venue for his second directorial effort, “Wish I Was Here,” and its cast, which includes Kate Hudson and Josh Gad. He is not a stranger to Sundance — his first film, “Garden State,” premiered here a decade ago.

“Wish” premiered for a full house in a makeshift theater inside a racquet club, where co-star Mandy Patinkin made a quick appearance, having to return to Los Angeles for the SAG Awards that evening. “I think he might also be on some secret CIA mission,” joked Braff, referencing Patinkin’s role on “Homeland.” Braff and his brother Adam based the film’s script on their conservative Jewish upbringing. “I love a lot of the traditions, and I love Woody Allen movies, but the religion doesn’t necessarily work for me, and I think a lot of people in our generation are more openly questioning that now,” he said.

Hudson plays Braff’s wife in the film. “For me it was an absolute joy because Zach and I have been trying to work together for some years now and when he sent me the script to read, it hit me like a Mack truck. The themes of the film are things that I can relate to being a mom of two kids,” she said. “And there was no more perfect person to direct this than Zach. Having our friendship for so long, the intimacy and closeness that you felt in those scenes with him directing us felt very easy and comforting.”

At the Waldorf Astoria near the Canyons Resort, another private dinner was held for zombie comedy “Life after Beth” ahead of a bigger party for the film Sunday at the Blue Door. Star Aubrey Plaza put on a brave face for the occasion despite being sick. “I’ve been drinking a lot of whiskey and that’s making me feel better,” she deadpanned. She stars in the film with John C. Reilly, Anna Kendrick, Molly Shannon, Cheryl Hines and Paul Reiser. To prepare for her part as a zombie Plaza said she didn’t watch any other zombie movies. “I didn’t want to accidentally copy zombies in other zombie movies. I just closed my eyes and conjured up zombie sounds and physicalities that were probably based on childhood trauma or some kind of emotional damage that I had some point in my life,” she said.