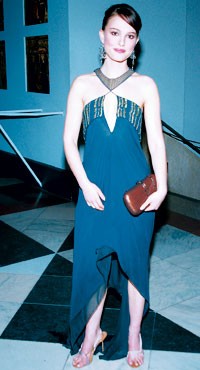 From corsets and crinolines to shower shoes and sneakers, thus they came. Though guests were asked to dress according to the Costume Institute exhibit, “Dangerous Liaisons: Fashion and Furniture in the 18th Century,” walking into the Metropolitan Museum of Art on Monday night, one would be hard pressed to identify a theme. Yes, there was the rare Madame de Merteuil — see Blaine Trump and Amber Valletta. Anne Heche might have been mistaken for Marie Antoinette in her last days — especially given her mad beehive ’do. And Andre Léon Talley could have hidden Renée Zellweger in his 18th-century men’s manteau, made especially for him by Karl Lagerfeld, who packed his svelte self into a sequined tuxedo.

But with other, more modern looks in abundance, one couldn’t fault Mandy Moore, whose fashion credibility rose a notch when she entered with Jack McCollough and Lazaro Hernandez of Proenza Schouler, for not realizing the evening’s common thread.

“I didn’t find out there was a theme until I got here,” Moore said tremulously. “And I don’t think dangerous liaisons necessarily apply to me.”

The consensus among the crowd, which included the socialites (Anne Bass, Tara Rockefeller and Samantha Boardman), the moguls (Barry Diller, Edgar Bronfman Jr.and Donald Trump), the designers (Calvin Klein, Donna Karan, Karl Lagerfeld, Tom Ford, Nicolas Ghesquière, Zac Posen and Olivier Theyskens) and the celebutantes (Sofia Coppola, Claire Danes and Natalie Portman), was that last year’s “Goddess” gala was easier to dress for. After all, bustles, trains and crinolines pose all sorts of problems, not the least of them being frightening your loved ones.

“When I left the house, my dog, Pearl, didn’t even recognize me,” said Blaine Trump, who added that her hairdresser was coming the next morning to help her tease her hair into a more professional confection.

Helen Schifter, in a gown Hamish Bowles assessed as vintage Arnold Scaasi, tried to avoid an encounter with the ladies’ room. “I’m not drinking anything,” Schifter announced, leaving her quite the odd woman out in this crowd.

Being a model didn’t seem to provide any additional finesse. Linda Evangelista, looking like her old self in Jean Paul Gaultier couture, found herself in something of a dangerous liaison when she dropped her place card. “I can’t bend over,” Evangelista twittered. A party guest — male, of course — came dashingly to her rescue.

Not everyone had trouble negotiating their gowns, however. “This corset’s quite comfortable, actually,” proclaimed Anne Grauso, gesturing to her fitted Carolina Herrera bodice. “But then I’m probably the only person here who thinks so.”

Yet the difficulty of embracing elaborate dress kept the vast majority of guests in more quotidian attire. Narciso Rodriguez and Marc Jacobs arrived in sneakers, while Isaac Mizrahi one-upped them with a pair of shower shoes. Other designers snagged a few celebrities and arrived with them, hand in hand and camera-ready. Scarlett Johansson and Hilary Swank were guests of the Calvin Klein house, Michael Kors recruited Molly Sims, David Lauren escorted Sheryl Crow and Domenico Dolce and Stefano Gabbana squired Jennifer Lopez. La Lopez apparently called in every single Art Deco Dolce & Gabbana gown, but chose a custom-made Frida Kahlo number that recalled her breakthrough role as the late singer Selena.

And with Julianne Moore, Charlize Theron and Naomi Watts rounding out the crowd, the Costume Ball could almost have been the Golden Globes. CAA agent Bryan Lourd was just glad it wasn’t. “It’s not the Oscars, so I can start drinking now,” Lourd said before racing off to the bar.

“Yeah, you don’t have to work,” Eva Mendes told him. “Here, they don’t drop your name every five seconds.”

While there may not have been much name-dropping, there was certainly rubbernecking. Jimmy Fallon chatted up Barry Diller; Jerry and Jessica Seinfeld gabbed with Renée Zellweger, in Carolina Herrera and an Asprey necklace, and Carson Kressley capitalized on his Fab Five fabulousness by double-cheek kissing Lucy Liu, Gigi Mortimer and Sally Albemarle.

At the dinner — not much more substantive than the fried nicoise olives and asparagus spears being passed during cocktail hour — Hugh Jackman coaxed the buttoned-up crowd to dance to “That Old Black Magic.” “Hey, Jude Law, I hear you’re the chair to the dance! Come on and dance,” Jackman exclaimed, not realizing that Law was in absentia because of a personal matter. (Law, according to his publicist, was in Africa on safari with his family.)

As Pharrell Williams and N.E.R.D. later entertained the masses, the rest of the night’s partying was left in the well-groomed hands of Amy Sacco, who recruited all types for some debauchery at her club, Bungalow 8, including Ford, Stella McCartney and co-chairs Silas Chou and Lawrence Stroll, whose Asprey sponsored the evening. “Now, I’m going to dance,” Stroll said, and he was off.

And if the evening’s theme didn’t inspire all to dress up in period, at least it got them thinking about the whole topic of compromising positions.

“Dangerous liaisons are very good, but they get you in a lot of trouble,” said Donald Trump, one who is well versed on the subject. (He later found himself in a sticky situation when a waiter spilled coffee all over his tuxedo. “What’s on me?” he said, with aplomb. “Is it coffee or milk?”)

“It’s all about ‘Should you or shouldn’t you?’” rasped Johansson. “You can’t help yourself, but you must.”

William Ivey Long made an attempt at a dangerous liaison in the restroom. “Hello sailor,” he joked, as he sidled up to Anne Heche’s husband, Coley Laffoon.

As for Lauren Bush, also in Asprey gems, her dangerous liaison for the day: “I played hooky from school.”