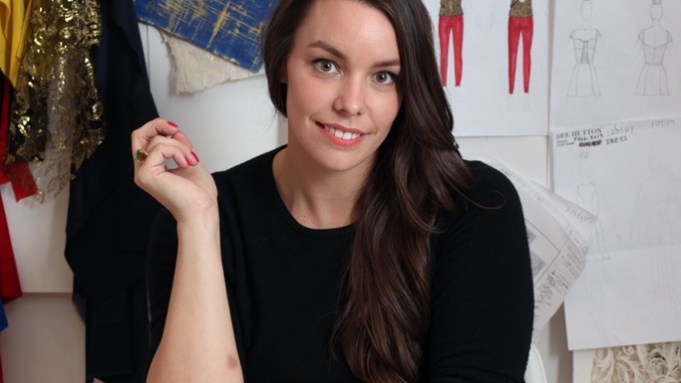 “Basically, I just wanted to play dress up with people for the rest of my life,” Nedenia “Dee” Hutton Craig says. The 27-year-old aspiring designer is sitting in her cozy atelier, replete with a pair of ornate gold antler chandeliers, orange plush armchairs and stacks of familiar fashion tomes, just off Union Square in New York.

Hutton Craig’s lineage afforded her quite the wares to plunder when it came to her own childhood dress-up adventures. Her trunk teemed with satin gloves and tiaras that belonged to her grandmother, Dina Merrill, and great-grandmother, Marjorie Merriweather Post, both socialites who ascended Manhattan’s society stratosphere after Merriweather Post founded the wildly successful General Foods Inc. franchise. She became the wealthiest woman in America when her fortune reached about $250 million.

Both women became known for throwing extravagant costume parties, which Hutton Craig hopes to capture the spirit of with her semi-namesake, made-to-order line, dubbed simply Dee Hutton. During booking appointments, clients sip on bubbly and try on samples. Hutton Craig offers input and with the client, the two collaborate to customize the design according to preferences including shortening garments, rethinking silhouette or changing fabric.

Hutton Craig got her start interning with family friend and made-to-order designer Peggy Jennings. She graduated from Parsons The New School for Design this past spring. In June she moved into her Union Square studio, which she found through her godbrothers, Alex and Mike Faherty of the buzzy Faherty Brand.

Hutton Craig’s designs for the current season and aims for a quicker turnaround time, usually delivering garments within a month. Production is split up between the atelier and garment district-based factories.
Her base collection for fall is Moulin Rouge-inspired with hints of matador influences, though clients can choose to play up or down these touches. The range retails from $300 to $6,000.

“I think it’s as much about the movement in the clothes as it is about the way they look,” says Hutton Craig, her gold cuffs jangling as she swished a ruby-red lace cocktail dress, one of her favorite looks of the collection. “I just love this intimate process,” she continues. “Making women their dream dress, what’s better?”