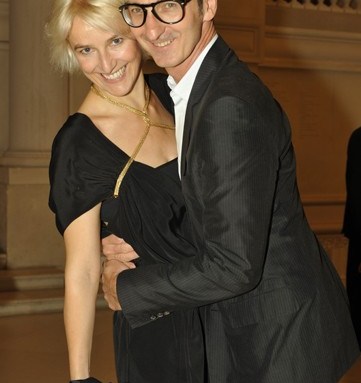 PARIS – Designers ran out of superlatives at the opening of the Madeleine Vionnet retrospective, hosted by the Chahan Gallery and Les Arts Décoratifs, on Tuesday night. Guests including Azzedine Alaïa, Silvia Venturini Fendi, Yves Carcelle and Arielle Dombasle took in the exhibition before descending to the museum’s Galerie Jardins overlooking the Louvre gardens. “It’s truly beautiful, each dress is a masterpiece,” said Alaïa, who confessed he’s lost count of the number of Vionnet pieces he owns.  “It’s orgasmic! It really shows the couture craft to the max: She understood fabrics so well,” enthused Andrew Gn.  “The fabrics produced the idea,” added Bruno Frisoni.

Mingling on the dance floor, Alexis Mabille said guests at his first men’s show Thursday may hear a familiar voice, that of Katell Le Bourhis, a former adviser to Bernard Arnault who also worked for Diana Vreeland, known for her taste for the color red. “It’ll be like old-style Saint Laurent. It’ll be live, though she’ll be hidden, commenting on the models and the looks,” said Mabille, who first crossed paths with Le Bourhis at Christian Dior. “We met in the lift. I was wearing red pants and so we got chatting.” Vanessa Bruno said she’s been working on a four-minute mini-movie for her label, meanwhile, starring Lou Doillon. Directed by Stéphanie Di Giusto, who’s shot music clips for French chanteuse Camille, the clip will be screened in July before heading online.

Sampling a chocolate cupcake, Vincent Darré said he’ll soon be throwing a party for the first anniversary of his furniture store. “Ines de la Fressange, who pushed me to do it, will be the guest of honor,” he said, adding he’ll next be working on a line of wallpaper with actress Valérie Lemercier. Already in holiday mode in a pair of shades, Giambattista Valli said he’s looking forward to his yearly vacation in Positano, Italy.