Dorian Grinspan Talks Fashion and Founding Out of Order Magazine 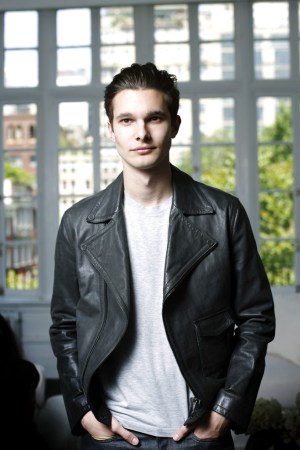 Dorian Grinspan — a 20-year-old Paris native, sometime model and third-year history major at Yale with chiseled features, a James Dean-esque pompadour and a not fully faded French accent — was at home in his airy, penthouse loft overlooking Manhattan’s Gramercy Park on Tuesday, a week removed from finals and prepping the second issue of his own fashion magazine.

“I didn’t come [to the U.S.] wanting to do a magazine. I arrived at Yale and I was really, really bored,” said Grinspan, editor in chief of the biannual Out of Order magazine. “[Yale] is a really amazing place, but outside of your classes and work, you have a lot of time and you don’t have a lot of things to do.”

The finished work looks more like an upscale art magazine — a collector’s item for one’s coffee table — than a typical student publication. The 244-page second issue — which Grinspan funded through advertising (including the likes of Stella McCartney, Theyskens’ Theory, Patrik Ervell, Bulgari and Jason Wu) and newsstand sales — features a photo spread and cover image by Larry Clark; interviews with Olivier Theyskens, Angel Haze and Ryan McGinley; a film appreciation of “The Last Picture Show,” the 1971 Peter Bogdanovich film, and an editorial featuring the model Arizona Muse with her young son, Nikko.

The magazine also has an online supplement with original content, updated by its small staff of editors and contributors, most of whom are college students from Yale and New York University, among others. Grinspan admitted that he gets most of his subjects by cold e-mailing them — that’s how he nabbed the spread with Clark. Opening Ceremony and Colette are among the magazine’s international stockists while Fivestory, which is advertising in the second issue, is holding a launch party for it Thursday night.

Clearly Grinspan has connections — and bravado. His mother, who took him shopping with her from the age of five, managed to pique his early interest in fashion, which continued throughout his teens when he started to frequent fashion parties in Paris. He eventually landed an internship at Numéro magazine and then moved to the U.S. for college.

Out of Order grew out of his obvious restlessness with New Haven and a few trial-and-error experiences with start-up magazines run by other students, after which he decided to launch his own.

“Young people working together that wouldn’t have the opportunity to work on something big, or to have a cover, or to have a 17-page spread — that’s what is interesting for me. Putting someone superyoung like Simon Cave or Michael Avedon next to Larry Clark — it gives them legitimacy to be next to someone established. And for those who are established — they want some kind of footing with the younger generation. I think we provide that a lot more than a lot of other magazines.”