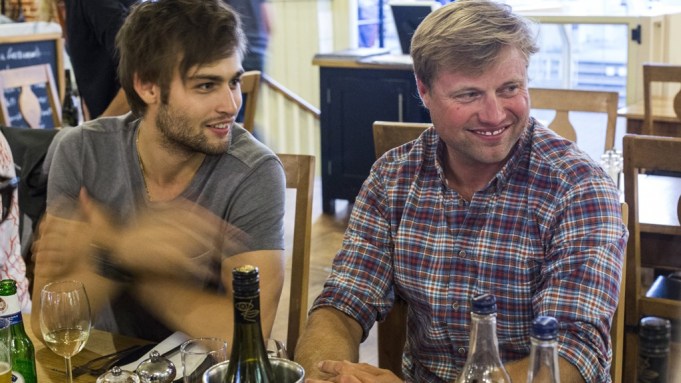 LONDON — “That was amazing! And we’re in suits! Yeah!” shouts young British actor Douglas Booth in jubilation as Hugo Boss, the 60-foot yacht sponsored by the German brand, makes a hairy 180-degree change of direction in frighteningly close proximity to the buoy around which it is turning during Thursday’s Artemis Challenge race off the coast of England. The boat is at an impossible angle to the water — almost perpendicular — but the wind keeps her in the lead, pushing the top of the mast ever closer towards the waves.

“That was a classy move,” says fellow actor Sam Reid, also besuited, as the boat drops back down to a less treacherous tangent. “Are they going to turn?” Booth asks as he looks back and sees the Macif boat come about in a much wider circle. “Yes,” answers rigging manager Will Jackson. “They’re just being a lot safer than us.”

Booth and Reid aren’t the only ones so dashingly attired: All of skipper Alex Thomson’s crew is decked out in Hugo Boss suits for the race, looking like seaborne James Bonds. They’re almost as heroic as they cut through the waters surrounding the Isle of Wight, hoisting numerous sails, jibing, tacking, furling, unfurling, hauling, striking, winching and all manner of other nautical verbs — all while keeping the two young actors out of the drink.

Neither Booth nor Reid are strangers to yachts and they’re eager to help out during the race, enthusiastically stowing sails and shifting bags of sails from starboard to port and back again. “[Hugo Boss] called and said, ‘Do you want to come and sail on a big yacht with Alex Thomson around the Isle of Wight?’ I was, like, ‘Yeah.’ And help a charity in the process? Double yes,” says Booth, who is hoping to be able to donate a large share of the 10,000 pound ($15,000) prize money to Kenyan charity Kibera In Need. “I wanted to choose a smaller charity so you could actually see directly where this money is going,” Booth explains of his choice of beneficiary, which eventually received a check for 1,250 pounds, or $1,890.

“This is stressful; I feel a bit sick,” he says during the last third of the race, glancing anxiously over his shoulder. Sea sick? “No, nerves. That boat is gaining on us.”

As the Macif yacht overtakes Thomson’s boat soon after, Booth’s face falls in genuine dismay and disappointment. “Is there any way that we can catch them at this stage?” he asks the skipper. “Only if we were faster. And we’re not,” answers Thomson. “That’s why he beat me in the [Vendée Globe] race, there’s nothing we can do now. I’d be more worried about the boats behind us.”

The Boss team finishes the race just two minutes behind Macif, after 4 hours and 34 minutes. Booth says that despite the mild conditions at the start, the actors got all the action they were hoping for. “To start with, I was expecting more bang! bang! splash! splash! and for it to be a bit more crude but, actually, it was really like an art, very technical, tactical, and it was fascinating,” says Booth.

The actor, who recently appeared as Pip in a television adaptation of Charles Dickens’ “Great Expectations,” has five films coming out within the next year, all of which will accelerate the trajectory of his swiftly rising star. In October, he will appear opposite Hailee Steinfeld as Romeo in “Romeo and Juliet.” The last actor to play the role in a film of this scale was Leonardo DiCaprio in the nascent stages of his career. Comparisons are easy to make but are quickly dismissed by Booth. “DiCaprio is one of my favorite actors; his career is one that I look up to and admire,” he says. “But people come along at every job you do and tell you, ‘This is going to make you the next big thing, this is going to change your life.’ I say, just do it for the love of what you’re doing and forget about everything else. If things go crazy, they go crazy.”

They will go crazy. Following “Romeo and Juliet,” Booth will star with Russell Crowe and Nicole Kidman in the biblical drama “Noah;” “Jupiter Ascending” sees him out of period costume and into a pair of tight leather trousers in a futuristic adventure opposite Mila Kunis and Channing Tatum, and, in “Posh,” he is part of an ensemble cast of the U.K.’s most talented young actors, including Australian Reid, who also has five films in the pipeline. He appears opposite Bradley Cooper and Jennifer Lawrence in “Serena” and in “The Railway Man” with Colin Firth and Kidman.

Thomson, who finished third in the solo non-stop round-the-world Vendée Globe race this year, has been sponsored by Boss for a decade. “They give us about 95 percent of our annual budget and, if we’re talking about a performance point of view, what it means to me is we don’t operate without them,” he says. Hugo Boss declined to comment on the value of the sponsorship.

“The thing I like most is that I’m an ambassador of sailing,” says Thomson, whose sponsorship deal was initially about consumer engagement and talking to people about sailing. “Lots of people ask me whether it pisses me off to have people on board; last year we took 1,000 people in 11 countries sailing and normally 95 percent of the people like it and they want to do it again and so that’s great. The thing is, it doesn’t matter how big your boat is, if you go out sight of land, you start to realize how small we are as a human race and I find that very humbling and that’s why I want as many people to do it as possible.”