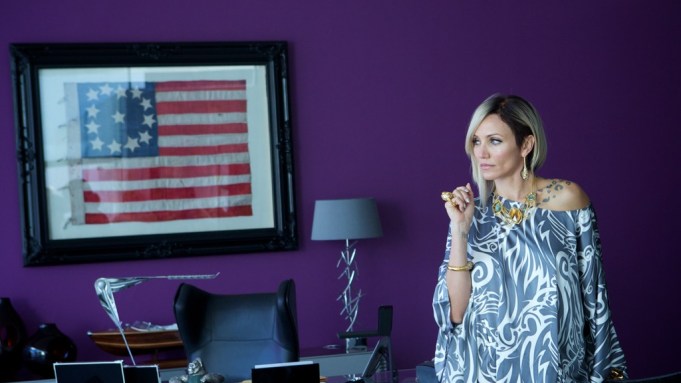 When the time came for director Ridley Scott to decide who would dress Cameron Diaz in his upcoming thriller “The Counselor,” he turned to his old friend Paula Thomas, creative director of Los Angeles-based brand Thomas Wylde.

“Ridley and I have been friends for a long time. His son Jake and I were in the same London posse, and his brother Tony was my daughter’s godfather,” says Thomas. “Still, I was humbled and surprised that he called me for the job.”

Scott has a history of collaborating with designers in his films — he tapped Armani and Gucci in 2001’s “Hannibal” and his longtime partner Giannina Facio was a fan of Thomas Wylde, known for its body-conscious, rocker-chic studded leather pieces and printed silks. “Ridley said, ‘You make fashion for a woman who wants to be seen’ and that’s exactly who Cameron’s character Malkina is,” says Thomas. Taking an uncharacteristically dark turn, Diaz plays a femme fatale married to a drug lord, played by Javier Bardem in the film, which hits theaters Oct. 25.

“Not that many roles get written for women who have this kind of power,” says Thomas. “I was surprised Cameron was cast in the role, but she completely immersed herself and I think audiences will see a side of her they’ve never seen before.”

As described by Diaz herself in a behind-the-scenes reel by Scott titled “Deadly Fashion,” “Malkina has no humanity. She’s soulless. Her world is very, very dark so she wants to wear a facade to deflect all of that.”

The cast is rounded out by Michael Fassbender, who plays the titular counselor, an attorney engaged to Penelope Cruz’s character, and Brad Pitt, who plays an underworld operator. Fassbender and Cruz sport classically put-together Emporio Armani looks, which help to underscore the divide between their world and Malkina’s.

For her first outing as a wardrobe designer, Thomas went back into the Thomas Wylde archives and chose several pieces to bring with her to London’s Pinewood Studios, where the film’s prep took place. Among the looks was the black one-sleeve stretch silk charmeuse “Hangover” dress from the fall 2010 collection, which Diaz wears in her first scene. As luck would have it, several of the pieces were already aptly named, such as the “Killer” jumpsuit, of black rayon matte jersey, and the “Gunslinger” minidress, in a red bullet-hole leopard-print stretch silk charmeuse.

Thomas also created several pieces for the film, including a Lycra snakeskin print minidress with ruffled shoulders, a black stretch leather motorcycle jacket and cognac-colored studded leather leggings that she paired with a cotton vest from the spring 2009 collection. The last look, a sort of sexy safari outfit, was made for a scene in which Malkina watches her two pet cheetahs go hunting from atop her car.

It’s worth noting that Malkina sports a cheetah-print tattoo that snakes over one shoulder and down her back. It’s shown off to great effect in two versions of the “No Skin” silk charmeuse Maori-print caftan from the fall 2012 collection.

“Cameron came to the set very prepared with specific ideas of how she wanted her character to look,” says Thomas. “She added a hood to the studded shoulder wool dress she wears in the final scene for an extra air of mystery.”

Thomas relished the film experience because, she says, “Unlike when you’re putting a collection together, you’ve got one character to focus on who has a story tell and you watch her come to life. I hope she becomes a cultural icon like Sean Young in ‘Blade Runner.’”