Naomi Campbell, Vogue Russia editor in chief Aliona Doletskaya and an oligarch were just part of the crowd celebrating with Diane von Furstenberg in Moscow. 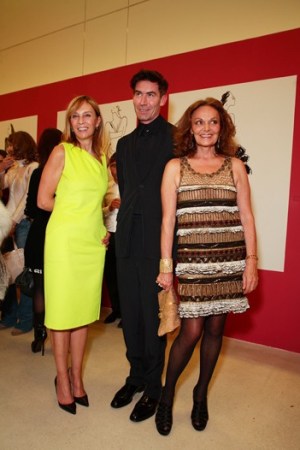 MOSCOW — Diane von Furstenberg looked visibly harried as she rushed to save a precious Andy Warhol portrait of her hanging on the walls of Moscow’s Manezh exhibition hall.

“Do something! People are just leaning on the art,” she shouted to an aide.

The halls of Manezh, located just outside the Kremlin’s walls, were packed with some 800 friends and fans as von Furstenberg hosted a party to celebrate the opening of her retrospective here, titled “Journey of a Dress.”

“It’s actually very exciting, very emotional,” said von Furstenberg. “My father left Russia 80 years ago and here I am, in a museum. It’s really dedicated to my dad.”

The story of the 63-year-old designer’s career is told through paintings by Andy Warhol and photographs by Helmut Newton. These hang next to blown-up magazine covers and articles from Interview and New York magazine, as von Furstenberg first exploded on to the scene in the Seventies.

Particularly stunning are works by photographer Ara Gallant, featuring von Furstenberg in a denim jumpsuit and bright red boots wrapped around the top of the Empire State Building, and a portrait of the designer with wet hair and her trademark large eyes.

“She is so powerful, and the light is shining from her,” said Natalia Vodianova, who gave von Furstenberg the idea to mount the exhibit. “I said, ‘Why don’t you do a retrospective of your work, of your life — I’m sure the Russian people will be truly inspired.’ She said, ‘That’s a great idea,’ and here we are. Finally.”

Each room of the exhibit, cobbled together in just over a month and curated by Vogue’s André Leon Talley, features mannequins wearing von Furstenberg’s signature wrap dress. They are divided into categories such as “Working Girl” and “Studio 54.”

Russian oligarch Alexander Lebedev and Vogue Russia editor in chief Aliona Doletskaya were among the others in attendance. After the opening, von Furstenberg hosted 70 guests at the Bolshoi restaurant, run by Moscow’s top restaurateur Arkady Novikov. They then danced long into the night at new club We Are Family.

Campbell, who now spends most of her time in Moscow, said she saw the exhibit as a sign of the Russian city’s growing importance. “I’m happy to meet my friends in the city that I live in,” she said.

Von Furstenberg has hinted the exhibit will travel, but didn’t reveal specific plans.