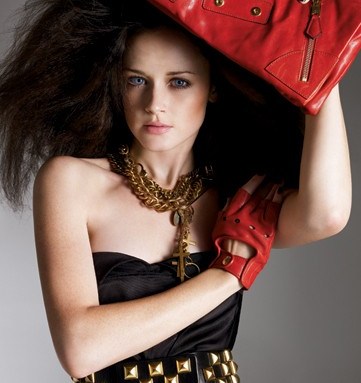 Alexis Bledel really wants you to know that she is not a cute, quippy and annoyingly perfect teenager. She just played one on TV. For seven years.

Indeed, the Houston native and former model spent the better part of this decade—14- to 18-hour days, nine months out of the year—playing Rory Gilmore, America’s favorite quickwitted daughter on the hit show Gilmore Girls, which ran from 2000 to 2007 on The WB/CW network (it currently lives in syndication on, aptly, ABC Family).

Now, Bledel, who stars in this month’s Post Grad as a recent college graduate with lean employment prospects and an eccentric family (the film’s cast includes Michael Keaton, Jane Lynch and a scene-stealing Carol Burnett), is taking on an ambitious new role: 27-year-old actress Alexis Bledel.

“I try to get away from the way people see me on the show in little ways, try to dress older or just differently,” says the brunette—all Madame Alexander–doll skin and pool blue eyes—who moved from Los Angeles to Brooklyn last fall. “I try not to wear anything that makes me look too young because that only aggravates the idea that I’m young and sweet like my character on [Gilmore Girls].”

And recently, there have been signs that Bledel is testing fashion’s grown-up waters. The décolletage-bearing Hervé Léger dress paired with Giuseppe Zanotti gladiator heels, for example, which she wore to the Whitney Museum’s annual Art Party in June, made a seriously sexy statement.

As did the black Cushnie et Ochs shift with wide side cutouts and swirly Sergio Rossi sandals she chose for the Tribeca Film Festival premiere of her indie film The Good Guy several weeks prior.

Not to mention the Eighties-inspired threads and look-at-me accessories she sports on these pages. “It was a fun fantasy day for me,” she says of the shoot, adding: “It’s stuff I don’t wear that often. I usually wear jeans and button-ups.”