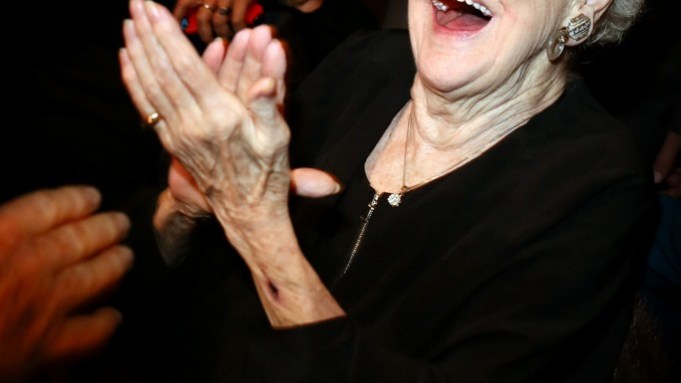 A new documentary about the actress Elaine Stritch screened Wednesday night in Manhattan at the Paley Center for Media. Stritch, 89, has a career that spans nearly 70 years on stage and screen, but her most memorable turns have often come when she’s playing herself, whether on a documentary about the making of the musical “Company” or her autobiographical one-woman show “Elaine Stritch: At Liberty” and the HBO documentary that followed. So the real prize in attending the premiere of the new film, “Elaine Stritch: Shoot Me,” was a chance to take a glimpse at Stritch herself.

The Statue of Liberty doesn’t make any sense in Birmingham, Mich., and neither does Stritch, but, citing her health, that’s where she moved last April, and she hadn’t been seen since by anyone but a few very close friends.

What one wants in meeting Stritch is the exuberance and brio she’s come to epitomize, and she didn’t disappoint — though in a wheelchair, she made her entrance on the red carpet in oversize Carrie Donovan sunglasses, a lavish fur and pantless, of course, in sheer hose to regale reporters with anecdotes in her signature screech.

She is more frail than her last television appearances would suggest, and the surprise of the film is that it doesn’t soft-focus the complications of her advancing age and struggles with diabetes. In one poignant hospital scene, Stritch addresses the camera: “It’s time for me now.”

“It was exhilarating but sad,” Sandra Bernhard said. “She always looked like she was who she was. There was that era when women looked old before their time, and I mean that in the best way, before all the fillers and the meshuga. And it’s so weird when someone catches up with themselves.”

As elegiac as the film is, it also accomplishes the task of capturing Stritch’s outsize persona for posterity, much like other recent documentaries about feisty New York women, like Carol Channing and Joan Rivers.

“I did like when she decided to tell the cameraman what he should be filming and how he should follow her into the other room while she was unpacking her muffins. That was very Elaine, a very Elaine moment,” Lane said.

After the screening, Stritch was where she thrives, basking in the attention of an audience — photographers, cameramen, actors — all paying their respects. She said she would not move back to New York, though she misses the city.