You could have heard a pin drop when the Lanvin artistic director accepted his award at the YMA FSF Geoffrey Beene National Scholarship Awards Dinner. 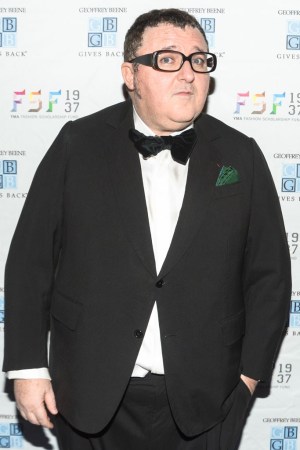 You could have heard a pin drop in the jam-packed Grand Ballroom at the Waldorf-Astoria Hotel Tuesday night when Lanvin artistic director Alber Elbaz stepped up to the podium to accept the 50th anniversary Geoffrey Beene Fashion Impact Award at the 2013 YMA FSF Geoffrey Beene National Scholarship Awards Dinner.

Elbaz proceeded to mesmerize the crowd, which numbered more than 900, with reminiscences of the seven years he spent working for Beene at his design studio in New York City.

He started by relating how he “tried for three years to get an interview with Mr. Beene,” but was put off time and time again, being told: “Honey, we don’t have an opening.” That rejection also resulted in a lifelong friendship with Beene’s telephone operator. “Her name is Joyce and she’s here tonight,” he said, prompting sighs of “ahh,” and applause. But thanks to an introduction by former Bergdorf Goodman executive Dawn Mello, Elbaz was finally introduced to Beene and managed to snag “the job of my life. It was a dream that came true,” he said.

Like many dreams, the reality was somewhat different. Elbaz said when he reported to work the first day, there was “no place for me in the office or in the studio.” Ultimately, he was put in a dressing room with a coffee table as a desk. “I sat there sketching for a week and no one even said hi to me,” he said. He was also told that those sketches “‘were not very Geoffrey Beene.’ I cried and I waited to be fired,” he said. But Beene, who was out getting cataract surgery during Elbaz’s first week, came to the rescue when he returned. “He saw my work and said to give it to Charlie, his head of atelier, which is the first time that had ever been done. It was a huge honor.”

It also opened up what he called a “speechless dialogue” between the two men, one where words were not spoken but the message was clear. “I would do a sketch, leave it on his desk, he would resketch it,” etc. “I was like a little dog waiting for his master.”

Following his speech, Elbaz told WWD that the recollections he shared were personal because “they had to be personal. We had a very special relationship and some very beautiful moments together. Everything I know, he taught me. It was a very good school and like a home away from home. I’ve been very lucky. I’ve worked with Mr. Beene and Mr. Saint Laurent, the very best.” When asked what Beene would have thought of Elbaz’s ascent in the fashion world, he thought for a moment and said: “I think he would have been very happy, proud and content.”

The evening also honored retired PVH Corp. president Allen Sirkin with the Lifetime Achievement award, and Michael Balmuth, chief executive officer of Ross Stores, who was presented with the Retailer of the Year award. It raised $1.9 million to support YMA’s scholarship, mentoring and internship programs, making it the second-most successful dinner in the organization’s 76-year history and celebrated the 125 college students from around the country who received $5,000 scholarships from YMA. The evening also included the presentation of four $30,000 Geoffrey Beene National Scholarships and another four $10,000 runner-up scholarships to students who had lobbied for the money by creating a variety of pop-up shops.