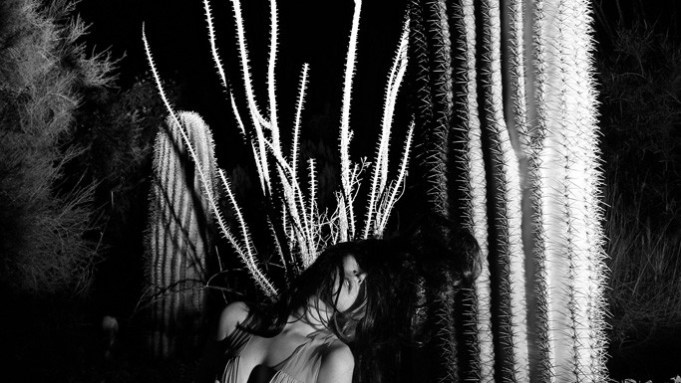 Elle Muliarchyk sees “Escapes From Paradise,” her latest body of work, as her resurrection.

“When you’re a fashion photographer, you put yourself in a box in many ways,” she says, explaining that a recent road trip helped her break free of her artistic confinement.

Standing on a cliff overlooking the ragged Connecticut coastline and sleeping under the stars in Antelope Canyon, Utah, allowed her “to be more free and figure out what my next direction would be,” she says.

Muliarchyk’s “Escapes” photos are haunting and mysterious. The stark terrain put her in a black-and-white frame of mind. “I love film noir so much,” says Muliarchyk, who shot self-portraits in the canyon, holding palm fronds over her head so their shadows would fall on her face, and kneeling in front of a fountain as if she’s praying.

Muliarchyk, a 28-year-old former model who worked with Terry Richardson, Patrick Demarchelier and Oliviero Toscani, wore clothes borrowed from Chadwick Bell’s spring 2013 collection. “It was a surreal experience to wear delicate garments in the middle of a desert or standing on the stormy shore,” she says. “Every day I’d pull a new garment out of a suitcase, put it on and transform into multiple characters.”

“Escapes” can be found on an interactive Web site Muliarchyk launched this month, escapesfromparadise.com. Jacob Wildschiødtz, whose credits include Marc Jacobs and Loewe, designed the site and Anne B. Kelly translated Muliarchyk’s account of her trip into fiction.

Raised in Vietnam and Prague, Muliarchyk may be more fascinated by religion than most since it was off-limits for so long. “We weren’t allowed to be religious during communism,” she says. “When I was less than six months old, my grandmother smuggled me out of Belarus and had me baptized in a Christian Orthodox church in Lithuania. She taught me how to cross myself when I was six.”

For “Begotten” in 2009, Muliarchyk visited 500 churches in nine months and photographed statues of saints and martyrs wearing luxury accessories. There’s Saint Jude, who was famous for his travels, holding Jeremy Scott’s winged sneakers. Mary, at age 14, holds red platform Dolce & Gabanna shoes, and the baby in the arms of another Mary clutches a Van Cleef & Arpels broach. Saint Lucy, who is said to have poked her eyes out, gazes down at a blue stone-encrusted evening bag.

Muliarchyk’s work appears in independent fashion magazines because “they allow you to express yourself as an artist and create and develop your voice.”

Her series of self-portraits in dressing rooms put her on the fashion map seven years ago. Sneaking into luxury boutiques with as much equipment as she could conceal, she maneuvered the confines of tiny spaces while using backdrops, lighting and props. “I almost got arrested at Jill Stuart,” she says.

A fashion story for I Love You magazine’s diet issue, featuring Sudanese model Ataui Deng with supersized helpings of food — a boar’s head, giant octopus, and leg of beef — was controversial. “The model grew up where food is a luxury. The way people treat food is a reflection of our society. Food is the same as a piece of contemporary art — a Damien Hirst,” she says.

Muliarchyk has far ranging interests, everything from music to math. A story for Garage magazine used hairstyles to convey molecular interpretation and quantum entanglement, combining fashion and fractals. Muliarchyk shot a model with her hair plaited, braided and styled to look like latticework. Muliarchyk, who took classes at Columbia and Berkeley, studied to be a scientist. “I never finished my degree,” she says. “I wanted to be a model.”

She had enough of that after several years. Now she has a number of projects on the go at any one time. “I’m capturing conductors in the moment of ecstasy,” she says of one of her ongoing ones.