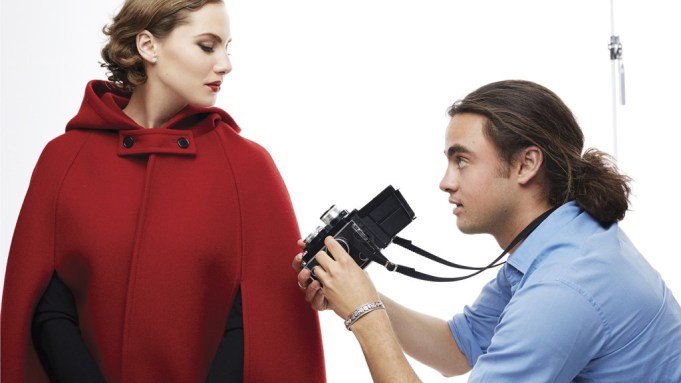 Emma Ferrer. It’s a name that shouldn’t resonate but the 20-year-old has landed the cover — albeit, the subscriber cover — of Harper’s Bazaar’s September issue.

Ferrer was plucked from real-deal obscurity (a quick Google search proves it) but the woman is the progeny of a fashion-world deity. She’s Audrey Hepburn’s paternal granddaughter. Her father is Sean Ferrer, Hepburn’s son from her marriage to actor Mel Ferrer. The fact that she’s a remarkably poised, young, beautiful fine arts student who’s spent much of her upbringing in Florence, certainly doesn’t hurt either.

“Initially, I wasn’t sure,” Ferrer says of being approached. “Glenda [Bailey, editor in chief] contacted my father with the idea and explained that Michael Avedon would be the photographer. So understanding that there was this parallel narrative, I was able to approach it as this very meaningful experience.”

The cover comes in two versions with little variation on the beauty: Her chestnut locks are swooped back cleanly with simple makeup that allows her enviable, Hepburn-esque brows to take center stage. The fashion, obviously, varies. Her first look is Ralph Lauren fall. The shot is of Ferrer’s profile, her swanlike neck spouting out of a sea of gray ostrich feathers. In the other version, her hourglass frame is coated in duchesse techno cotton in a gown from Alber Elbaz’s latest resort collection. A “work of art” is the term Ferrer used to describe the latter look.

“Putting that dress on was intimidating,” she says now. “I really felt like I needed to make myself worthy of it, so that was difficult. I was very stiff at the beginning because I was nervous about getting the perfect shot, thinking everything needed to be pristine.” If Ferrer felt frozen, it’s not conveyed in the photographs. She looks natural, even languid. “Throughout the sitting, Emma enhanced,” Avedon says. “I think at first she was so aware of the camera, but we started to flow and she discarded that awareness.”

Of course, they would be remiss if they didn’t shoot Ferrer in the quintessential Hepburn look: black turtleneck, black slacks and black flats, the essence of beatnik immortalized in “Funny Face.” The shot — Ferrer’s limbs flailing about — is printed in the accompanying inside spread, next to a black-and-white shot of Hepburn from the movie, similarly posed. “Michael put some music on and he started dancing and Joanna [Hillman, stylist director] started dancing,” Ferrer says. To loosen her up, Avedon played a mix of James Brown, Motown and Arcade Fire. “They were being silly and adding levity so I’d be more comfortable,” she says.

She calls WWD from such a romantic-sounding locale, it almost seems fictionalized. “I’m in the South of Spain. In a small town on the sea,” she says. Even over the phone, Ferrer comes across as an exceptionally self-possessed and gracious young woman. She speaks daintily but in a paced and thoughtful manner. She doesn’t sound like a 20-year-old.

“I also love the Tod’s look, with the beautiful scarf and almost theatrically big hat. Being able to use dramatic accessories brought a whole different facet to the images,” she says.

Avedon shot Ferrer in Florence, where she has lived the past six years after an adolescence in Los Angeles. She’s spent the past two years studying fine arts at Florence Academy of Art and will continue her training Stateside in January when the academy opens an outpost in Jersey City. She’s planning to move to New York in the next few months. “I’m grateful that I grew into a young adult in Europe because now I speak three languages. I have a grasp on a quality of life that I like and I strive for, but I’m ready to move into a big city like New York now,” she says.

The move may also prove opportune for a second fledgling career: modeling, a pursuit Bailey hinted that Ferrer was interested in. “Oh, well I have lots of plans for myself. I don’t see myself entirely devoted to a life as a model. I think it would be an amazing accompaniment to what it is I want to do. I’m interested in being involved in the fashion world,” she says, then pauses for a beat. “But not completely.”